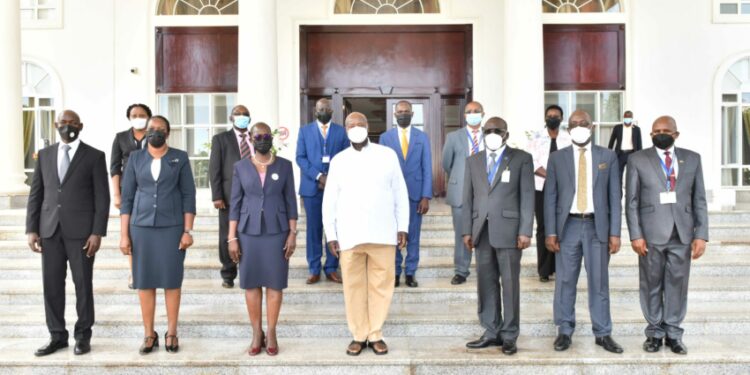 President Yoweri Museveni in a group photo with the Director of Public Prosecutions Jane Frances Abodo and her team after a meeting at the State House Entebbe on 26th May 2022. Photo by PPU/ Tony Rujuta.

H.E the President of the Republic of Uganda, Gen. Yoweri Museveni, has today met a delegation from the Directorate of Public Prosecutions (DPP) led by the DPP, Justice Jane Frances Abodo. The meeting was at State House, Entebbe.

During the meeting, the delegation decried low staffing, low salaries and threats on them as some of the challenges they face in executing their duties.

They reported that there are only 300 prosecutors countrywide.

In his speech, President Museveni thanked the team for their service despite the challenges they face.

“Please, be thorough in your work and remain patriotic and avoid corruption. The mistake with people in previous Governments is that they were not patriotic and did not care about the people,” President Museveni said.

On the issue of salary, H.E the President agreed with the team on a way forward.