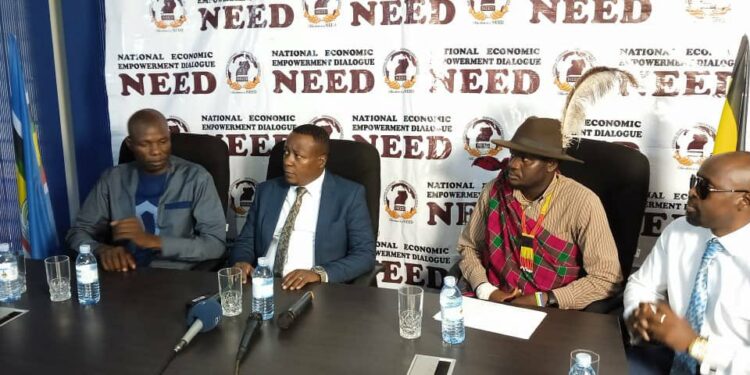 The National Economic Empowerment Dialogue (NEED), a political movement headed by Joseph Kabuleta Kizza has revealed that there’s a silent genocide in Karamoja sub-region where local people are being displaced and some killed because of their mineral wealth.

Addressing the media at NEED’s headquarters in Bugolobi on Monday, Emmanuel Chero, the Dialogue’s mobiliser in Karamoja sub region, said the reason behind the Karimojongs’ current misery, is that they were born in a mineral rich region.

“Our people are being displaced and killed. Government doesn’t want anything to do with friendly talks. They are more interested in taking the minerals using violence. They use the army to displace our people from their land which has minerals,” said Mr Chero who hails from Moroto district.

“Our government adopted the style of colonialists whereby they come and steal our resources and then take off without caring for the indigenous people. No body wants to talk about it. Our area MPs have been threatened and intimidated to the bone marrow. Its like Karamoja is not part of Uganda,”he angrily added.

Mr Chero also accused government of fueling insecurity in the subregion by distributing guns and bullets to some locals with the long run aim of depopulating the area so as it can take over the mineral rich land for its own benefit.

“There’s a direct involvement of the military in the security situation in Karamoja. Most guns (72 percent) recovered in the ongoing disarmament exercise belonged to UPDF. Recently a wife of a soldier was arrested with a sack of bullets as she tried to give them to Karimojong warriors. She was taken to the army detachment and the next day she was freely moving around.”

He also disclosed how and why the three geologists working for the Ministry of Energy and Mineral Development and three Uganda People’s Defence Forces (UPDF) soldiers were Killed in Karamoja in March this year.

He said the geologists and the army personnel were killed by Turkana warriors (from Kenya) who were trying to defend themselves from the soldiers who first opened fire at them.

“Karimojongs are pastoralists in nature and there are existing traditional by-laws and customs they follow. Most of them live in Manyattas (homesteads) with each consisting of 200 to 400 people. Each Manyatta has its own leader. So some local leaders from the Manyattas meet and discussed with the Turkana warriors who requested the former to allow them bring their cattle for grazing saying their area had become dry with no water and grass to feed their livestock,” Mr Chero recalled.

“The Karimojong leaders granted Turkana permission to feed their cattle from their land. They were also allowed to come along with their guns to protect their cows due to the insecurity in the area. By coincidence, on the fateful day, as the Turkana were grazing their cattle in Lotisan Sub County, Moroto district, the geologists being guarded by UPDF soldiers were also present in the same area allegedly conducting a mineral mapping survey. The soldiers panicked on seeing the Turkana warriors and started shooting at them. The warriors took cover and started to shoot back thus killing the geologists and the soldiers.”

“Days after the incident, soldiers went to look for the killers. Unfortunately, they killed innocent people after throwing bombs (aerial bombardment) on the Manyattas.”

In a seem to be another retaliatory move against the people of Karamoja,Mr Chero further asserted that government has since resolved to scrap off the State House sponsorship program for university students from Karamoja.

“Over 150 students on State House Scholarship program have missed their end of semester exams. They are paying the price of belonging to Karamoja sub- region.

Why disarmament is a wrong move:

On the other hand, Mr Chero said government is wrong to take away guns from Karimojongs since they use them to protect their cattle.

He said what government through UPDF  is currently doing, is to disarm Karimojongs without doing the same to their hostile neighbours like the Jie, who always attack and steal their animals.

“Government should reinstate the vigilante program, it was working for us.”

Perpetrators will pay for their crimes:

At the same media conference, Mr Kabuleta, said all those who have/are taking part in crime in Karamoja will one day pay for their sins.

The journalist turned politician said the people of Karamoja are suffering because of greedy leaders who think everything in Uganda belongs to them.

“Can’t you atleast compensate them with land where they can graze their cattle? The fact is that they (Karimojongs) are not interested in those minerals. They give them bullets to keep the crisis on. They push them away from their land because that’s where the mineral wealth is,”Mr Kabuleta explained.

“There’s a deliberate move to cut down the population in Karamoja so that they take over the land and steal the minerals freely….We are going to expose them because our politics is national, it doesn’t stop only in Kampala. Uganda belongs to us all, we are citizens, stakeholders, nothing will stop us from fighting for our rights,” the former Presidential candidate added.

Asuman Osaka, the NEED National Coordinator noted that they resolved to expose government’s wrong doings in order to create awareness among Ugandans so that they can fight for what rightly belongs to them.

“In Uganda our problems are the same, the causer is the same but spoken in different languages,” he said.