The Vice Chancellor of Makerere University Prof.Barnabas Nawangwe, has asked the government of Uganda, to set aside Shs. 2 billion annually, for the enhancement of salaries for university staff, especially scientists.

Prof. Nawangwe made this crucial plea today, while addressing graduands, their parents, sponsors, the media fraternity and other guests, during the 72nd graduation ceremony at the University’s freedom square in Kampala.

He clearly stated that un enhanced salaries, coupled with inadequate funds for the promotion of prominent researchers and scientists force them to go abroad for greener pastures, robbing the institution of prominent interllectuals, that are trained using the country’s meagre resources.

“A lot has been achieved, and yet, some challenges remain. Some of the challenges include the completion of enhancements of salaries of some categories of staff. We continue to lose many vibrant researchers to other universities globally because of this problem,” Prof Nawangwe said.

“Europe and other developed economies have established so called science visas through which they are luring our scientists. Secondly, some of our researchers leave the university because of the lack of funds for their promotion, even when they qualify. We need an allocation of UGX 2 billion annually to promote academic staff,” he added.

He also pointed out other challenges faced by the university, which need immediate redress, like loss of land, which he said has been grabbed by some negative elements.

“The University’s land, including the land that you excellency allocated to us is under threat by land grabbers and this is another challenge,” added Prof Nawangwe, as he expressed appreciation to the Education minister Hon Janet Museveni for her personal efforts in resolving the 70 years old Katanga land issue, for which a solution seems to be real.

He urged graduands to put into practice, the exceptional skills and knowledge they have attained during their course of training at the institution, while putting God at the forefront of everything they do, in close collaboration with their parents and guardians.

Also speaking at the ceremony, Chancellor for Makerere University Prof. Ezra Suruma congratulated graduands, for their ironclad perseverance, leading to the successful completion of their academic programmes.

He also lauded parents, guardians and sponsors for the unwavering support they selessly rendered to the graduands throughout their education journies.

Important to mention, he called upon these fresh graduates, to expeditiously exercise the knowledge and experience they gained while at campus, to create more institutions for service delivery, throughout the country.

Prof. Suruma also called upon the president of Uganda His Excellency Gen. Yoweri Kaguta Museveni to aid various academicians, in their endeavors to make the world a better place for man to live.

“Your excellency, I pray that the government will increase its determination to support citizens to create and strengthen both public and private institutions in several areas of education, health, finance, industry, and all areas of endeavor at national, regional, district and parish levels,” Prof Suruma said.

It should be noted that the first day of the five-day graduation ceremony saw a total of 12,474 graduands being awarded degrees and diplomas of Makerere University.

This number is much lower than that of students who attained similar awards during last year’s graduation, totalling 12550, a scenario attributed to divastating effects of COVID-19.

Also, the number of those who attained first class degrees reduced to 218 from 312 graduands for last year’s graduation.
Of today’s graduands, a total of 100 students graduated with PhD’s , 1236 with masters degrees, 10,998 with Bachelor’s degrees and 140 with undergraduate and post graduate diplomas.

Also important to note, 52% of the graduands were female, while males accounted for only 48% of the total graduands. Besides, 40 of the 100 PhD graduands and 492 of the 1,236 Masters graduands are female, representing 40% in each category. 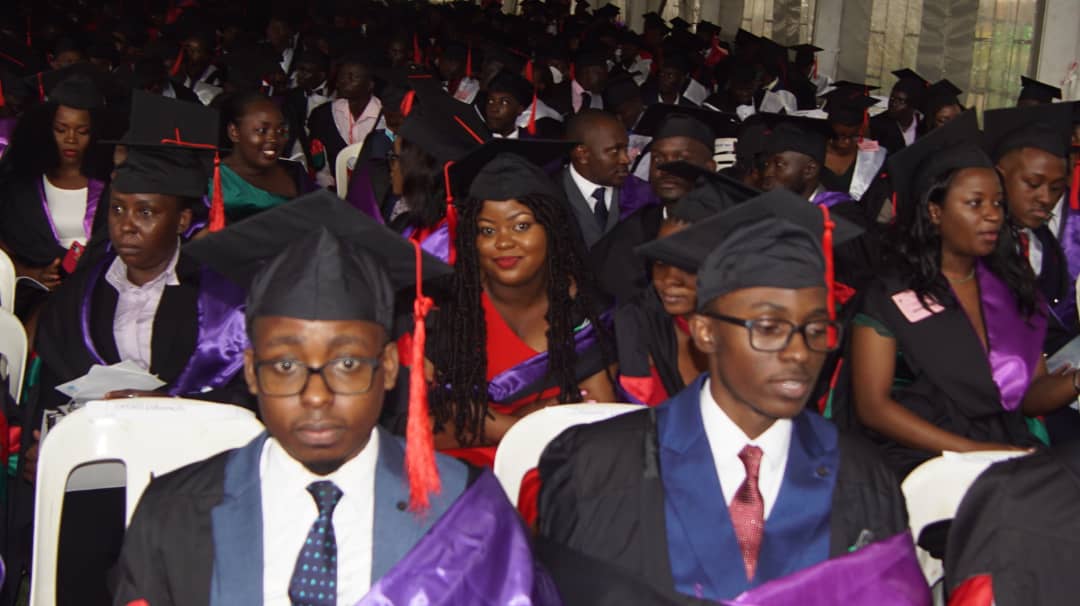 The first batch of graduands included students from the College of Health Sciences, College of Natural sciences, and the school of Law.

Besides, 254 of this 72nd graduation ceremony have been supported under the government of Uganda Students Loan Scheme, through the famous Higher Education Students’ Financing Board (HESFB).

The program was innitated in 2014, and has supported over 1,816 students to study different science programmes at the University, making it the biggest supporter of private students at the institution.