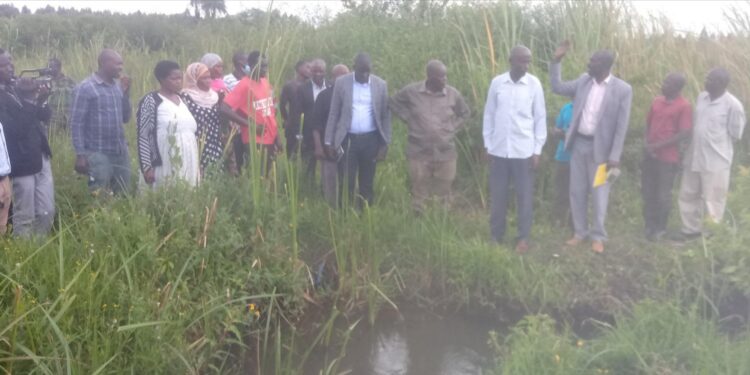 More than 1,000 people who have encroached on the Rucheche wetland in Mbarara City have been given one month to voluntary vacate. The encroachers are currently planting rice, tomatoes, and cabbages among other crops in the wetland.

The 150 acres cover three wards of Rukido, Nyarubungo, and Rwakishazis, in Mbarara City South Division. Rucheche is one of the wetlands that act as a water sponge that stores water for River Rwizi.

James Mwesigye, the Mbarara Resident City Commissioner directed the farmers who have cultivated the wetland with crops like sugarcane, eggplants, cabbage, and Irish potatoes and dug up trenches to stop carrying out any activities.

Mwesigye was shocked to find boundaries in the wetland created by people claiming to own pieces of land within the natural water source.

Zubeeda Nuwagaba one of the encroachers asked for consideration and requested to be allowed to harvest their crops.

Juma Makopo, another encroacher says that they have lived near the wetland since their father shifted there in 1985 and have cultivated near and sometimes within the wetland.

Francis Kahangwa, the LCII Chairperson Rwakishakis Ward, says that he has registered six cases of people fighting for boundaries in the wetland but their cases were forwarded to the Region Environment Police. He requested support in the fight against encroaches.

Herbert Tumwebaze, the Mbarara City Environment Officer welcomed the RCC’s directive noting that they have for the last three months been sensitizing the communities around the Rucheche wetland.

According to the National Environment Authority report, in 2019 Uganda loses 791 square Kilometres of wetlands; however, 4,487 hectares have been restored between 2011 to 2019.

Section 36 of the National Environment Act provides for the protection of wetlands and prohibits reclamation, erection of illegal structures, and empowers authorities to demolish any structure that is fixed in, on, under, or above any wetland.

The Act also empowers districts to manage wetlands within their jurisdictions and ensure that their boundaries are clearly demarcated so that even as water levels and wetland vegetation recedes, the communities are clear on where the boundaries lie.