by Mubiru Ivan
in News, Politics
19 0 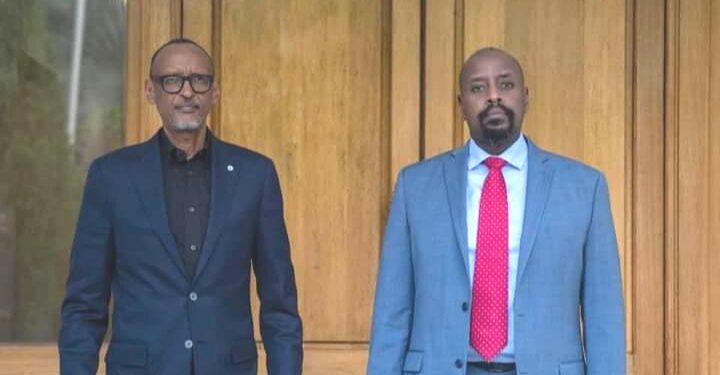 Rwanda’s President Paul Kagame has said he has had a cordial and productive meeting with Uganda’s First Son Lt Gen Muhoozi Kainerugaba.

In a statement shared on his official Facebook page on Saturday, Gen Kagame said, “President Kagame and General Muhoozi Kainerugaba had cordial, productive and forward looking discussions about Rwanda’s concerns and practical steps needed to restore the relationship between Rwanda and Uganda.”

After the closed door meeting, Gen Muhoozi who is also the UPDF Commander of Land Forces left for Uganda.

“Gen. Muhoozi Kainerugaba, Commander of Land Forces of the Uganda People’s Defense Forces departs at Kanombe International Airport- Kigali, Rwanda.Gen. Muhoozi has successfully ended his one-day private visit during which he met and had lunch with H.E Paul Kagame, President of the Republic of Rwanda,” Uganda’s High Commission in Kigali posted on its social media.

Gen Muhoozi arrived in Kigali on Saturday afternoon to meet President Kagame in a move aimed at mending the deteriorating relations between Uganda and Rwanda.

Early this week, Muhoozi said Kagame is his uncle and those fighting him are fighting his (Muhoozi)’s family.

“This is my uncle, Afande Paul Kagame. Those who fight him are fighting my family. They should all be careful,” Gen Muhoozi warned in a tweet on Monday.

This was not the first time, Gen Muhoozi was saying Gen Kagame is part of his family, emphasising the bond between them could not be broken whatsoever.

In an emotional tweet in 2020, Muhoozi, heralded his unwavering belief in the possible turn of events where the two historical allies (Presidents Yoweri Museveni and Kagame) would resolve their differences and be able to smile about the past and future once again.

“We are family. No one can break the historical bonds because they are from the almighty God. We shall always be brothers and sisters. Our two great leaders shall repair their relationship.” Muhoozi confidently remarked, captioning a photo of the two leaders with their families.

“The relationship between Uganda and Rwanda is beyond normal state to state relations,” he added.

Muhoozi’s optimism however reflected a completely different view from that portrayed by his Rwandan military idol – Paul Kagame. In Nov 2019, a visibly charged Kagame didn’t reserve his anger while showing his readiness to tackle Uganda’s aggression to his country. He vowed to mess with whoever intended to disorganize Rwanda, a message that was unquestionably intended for Museveni whom he has accused of backing hostile dissidents against his government.

“Those who think we haven’t seen enough mess and want to mess with us, whether from here or outside, I want to say : we will mess up with them good time. We are going to raise the cost on the part of anybody that wants to destabilize our country,” he warned.

Amid the accusations, Museveni has resoundingly denied any involvement in the plot to destabilize Rwanda, instead accusing Kagame of trying to infiltrate Uganda security and espionage. 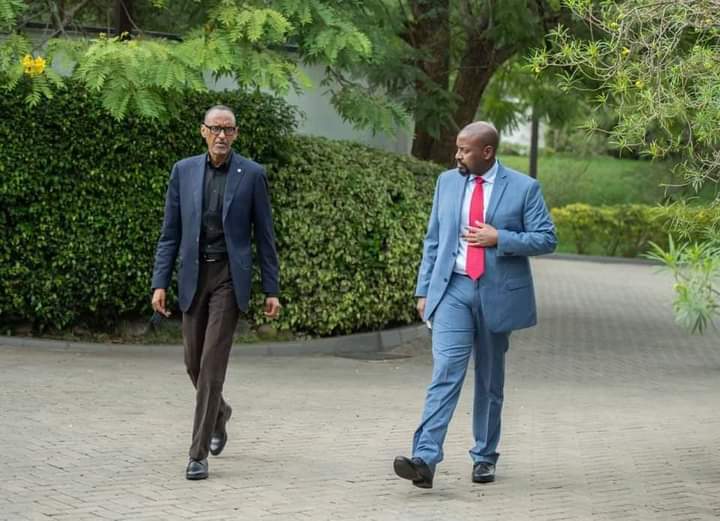 “It is wrong for Rwanda agents to try to operate behind the government of Uganda,” Museveni complained in his letter to Kagame in March 2019.

Even as things stand, Muhoozi, who seems to clearly understand the importance of an alliance with Kigali, especially if he gets into power at a time when opposition to the regime he will have inherited will be at it’s peak, has vigorously tried to show good will for the relations between the two countries in a bid to clear the mess created by it’s current leaders.

Prior, Muhoozi had also proposed erecting statues of Museveni and Kagame in all the major towns of both Rwanda and Uganda as an appreciation for their unchallengeable military accomplishments and their service to their respective countries.

“Brothers, comrades and revolutionaries quarrel but never fight. We have come from very far. I wish his excellence General Kagame and the people of Rwanda a solemn respectful Kwibuka, ” he tweeted in his message to Rwanda as they commemorated the 1994 genocide.

Meanwhile, Generals Museveni and Kagame are former guerillas who overthrew Tito Okello junta who had overthrown Milton Obote. Afterwards, Gen Kagame, then a major, led forces to overthrow a regime in Rwanda of Juvenal Habyarimana.

Whereas one would have expected relations between Uganda and Rwanda to be cordial as the two administrations share a common history, it has not been the case.

The bad blood between the two countries became visible in 2019 when Rwanda closed her borders with Uganda. Up to date the borders are still closed.

Rwanda accuses Uganda of harboring and giving aid to her enemies.

The dispute between the two countries is feared to threaten the stability of the East African Region as well as economic integration.