Haruna Sentongo is a Ugandan Entrepreneur, real estate dealer, philanthropist and founder of Haruna Enterprises, a corporate company based in the capital Kampala. 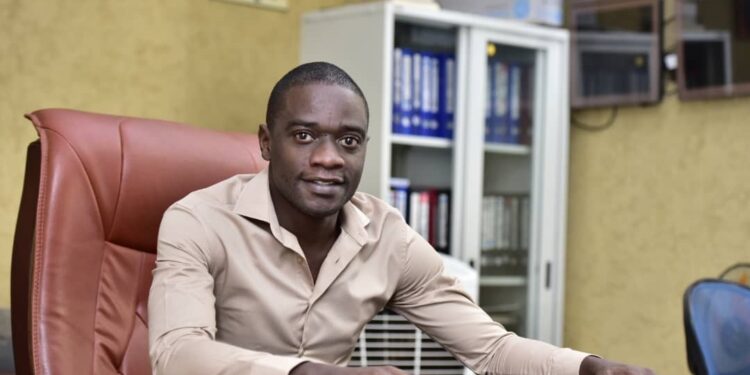 Kampala is one of the most bustling cities in Africa with challenges such as poor urban planning leading to congestion and slums.

However, in the heart of the busy city streets, buzzing with taxi touts, hawkers and bodaboda (public transport motorcycle), there is a 35 year old-billionaire who has set his vision on changing Kampala city’s slums into an ultra-modern work place with well organized shopping centres, markets, offices and homes.

Haruna Sentongo, who boosts of over 27 mega construction projects, is slowly taking advantage of areas that city authorities had given up on, and he is now changing these slums into modern, affluent city areas. Mengo Kisenyi was once known for crimes, including theft, drug dealings and prostitution.

However, Haruna has of recent made the area one of the places he is spending most of his time. He has constructed modern shops and market stalls for mechanics and produce vendors, which in turn has organized the once feared slum into a go and busy trading area.

Born on August 30th, 1987 to businessman Haruna Segawa and Nakayiza Jalia in Kalungu district, central Uganda, Haruna is among the youngest city tycoons in the country with an estimated networth of USD 420m.

He is a Ugandan Entrepreneur, real estate dealer, philanthropist and founder of Haruna Enterprises, a corporate company based in the capital Kampala.

Haruna however was not born with a silver spoon in his mouth. His wealth started from thin, but soon graduated into thick. In 2003, he is said to have started a small retail shop, dealing in female handbags imported from China, with just USD100 which he managed to raise with the help of his father.

His net worth further increased in 2005, when he formally started dealing in home and offices furniture using a distribution store in Kampala as his main base.

Using the profits he obtained, he decided to venture into garments in 2007, by importing ladies’ clothes from Southeast Asia, which he distributed throughout most of central Uganda.

In 2011, he constructed Haruna Towers after incorporating his Haruna Enterprises limited, with the help of loans from different Ugandan financial institutions.

Asides his massive wealth, Haruna is also into Philanthropy. In July 2020, he exempted about 500 of his tenants from paying rent at his Segawa market in Mengo, citing the adverse effects of Covid-19 induced lockdown.

In October the same year, he put smiles on the faces of his tenants at Haruna Shopping Mall in Ntinda, by exempting them from paying six months rent due to similar reasons, a factor which helped to stablize their businesses.

His first property was in the suburbs of Wandegeya, where he was told he would never make it because then that place was considered a slum and not worth investing in but nevertheless, he constructed his prime property Haruna Towers Wandegeya.

He later moved to Ntinda, where he constructed a building named Haruna Towers Ntinda which stands tall in town and none challenges its beauty. He is also constructing a new building in Nakasero of 16 floors which is projected to change the skyline of Kampala. Apart from real state, Haruna is a versatile entrepreneur who deals in other businesses such as food sales and motor spare parts.

Haruna also owns a processing bottled Mineral water company, Skin Care Products, and a range of Household consumables which include hand sanitizers, laundry and toilet soap, candles, confectionaries among others with factories located in Nsangi, Wakiso district of Central Uganda.

He also owns and operates cinema halls, including a 7D, 5D and 3D cinema theatres situated in Ntinda, an affluent suburb. In addition to all these, he has a multitude of gyms and other fitness centres in the capital Kampala.

He has personally pioneered business community in Kisenyi, and promoted development of several Ugandans by giving out space for business for free, for several start-ups in a promise to grow together with his clients.

The land itself is worth millions of dollars. This reporter understands that of the 24 acres, only 16 acres are full paid off, while the other 8 are ongoing transactions. In Munyonyo he has 6 acres @USD2 million.

Currently, he owns NM apartments, 17 building blocks and produce markets in the city centre. He also owns several plots of land downtown worth billions of shillings.

Haruna is preparing to develop his Nakasero project, starting 2023. This will be a 16 floor building in Kampala’s most premium location which also houses the presidential lodge, parliament of Uganda, supreme court, among other important infrastrutures. The building will cost him USD35 million but will pay off as its value will be set at USD62 million on completion.

He is the owner of Nakayizza market which seats on 4.5 acres. The market is home to over 2,800 businesses including agro produce market which sells cereals from all over the country and from as far as Tanzania. Market of its kind in Uganda, has parking for trailers and Lorries to convenience the business owners and their customers.

Haruna also owns the biggest independent auto sales market in Kampala with over 700 spare parts businesses and has 3,000 workers. A business community which is self-sustaining and a home to Kampala auto sales businesses, next only to Kisekka, with 500 car parking spaces.