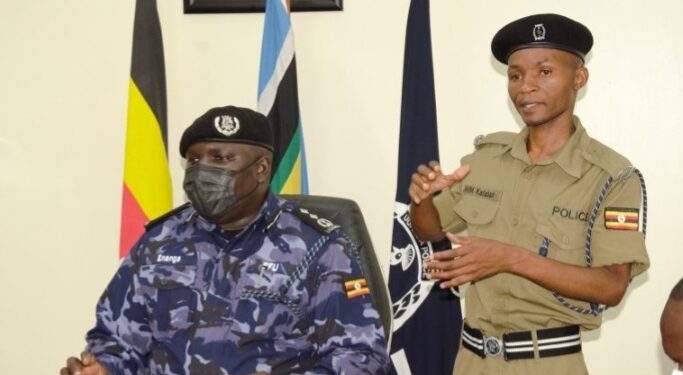 The Directorate of Crime Intelligence in close coordination with Flying Squad Unit, and the Territorial Commanders in Wamala Region, have made a break through in their operations and arrested eight suspects who form part of a newly formed rebel group, the Uganda Coalition forces of charge (UCFC).

Police allege that the suspects are behind the recent violent attacks on security personnel and other civilians.

“The facts gathered indicate that the collaborators, agents and operatives of the rebel outfit, opened two camps in Mityana district. One of them was at Wabunyira -Busujju and the other one at Kikandwa village. It is from these camps that their operatives lured two police officers namely; CPL Okech Alfred and PC Kigongo Moses, into an ambush where they killed and robbed two guns from them,” Enanga said on Tuesday.

“The operatives deserted the two camps, after the deadly attack at Busujju and shifted their base to the wetlands at Kabusi village, Bukuyo Town Council in Kassanda district. And it is from this new camp that they carried out another deadly attack on the 17.12.2021 at Nakasozi Police Post and killed two police officers who included CPL Nsubuga Francis and SPC Ddimba Paul. And then robbed their guns.”

Enanga further revealed that following the murder of their officers, the police task teams built on credible leads gained from their former camps in Mityana, tracked the assailants in Kassanda district.

“The Field Commander of the group, Makumbi Mosh alias Engineer, clearly indicated how they were recruited, majorly from Wakiso district. And thereafter, transported to their bases in Mityana, where they underwent basic training in guerrilla war tactics. They were further provided with material support and encouraged to conduct violent attacks on police officers, in advancement of the goals of the rebel group, of over throwing the current government. At the time of their arrest, they had concluded plans of attacking Sekanyonyi Police Station and acquire more guns. And also eliminate police officers whom they doomed as obstacles in their alleged fight for freedom.”

Enanga added that the arrests underscore Police’s resolve and commitment to identify, pursue and arrest all actors of violence.

” Our operations to truck down all other members including the sponsors and coordinators of the rebel group are still active and ongoing. The eight (8) suspects are being processed on charges of terrorism, being in unlawful possession of dangerous weapons, murder and aggravated robbery.”