by Stephen Kalema
in News
4 0

The president has advised Mr Peter Kamya to go and seek other court alternatives because he cannot help him.

Mr Museveni delivered the news to the embattled Businessman, in a 25/October/2021 letter in which he reminded Mr Kamya what he knew and all courts had said so, that he had defaulted the agreements he had made. 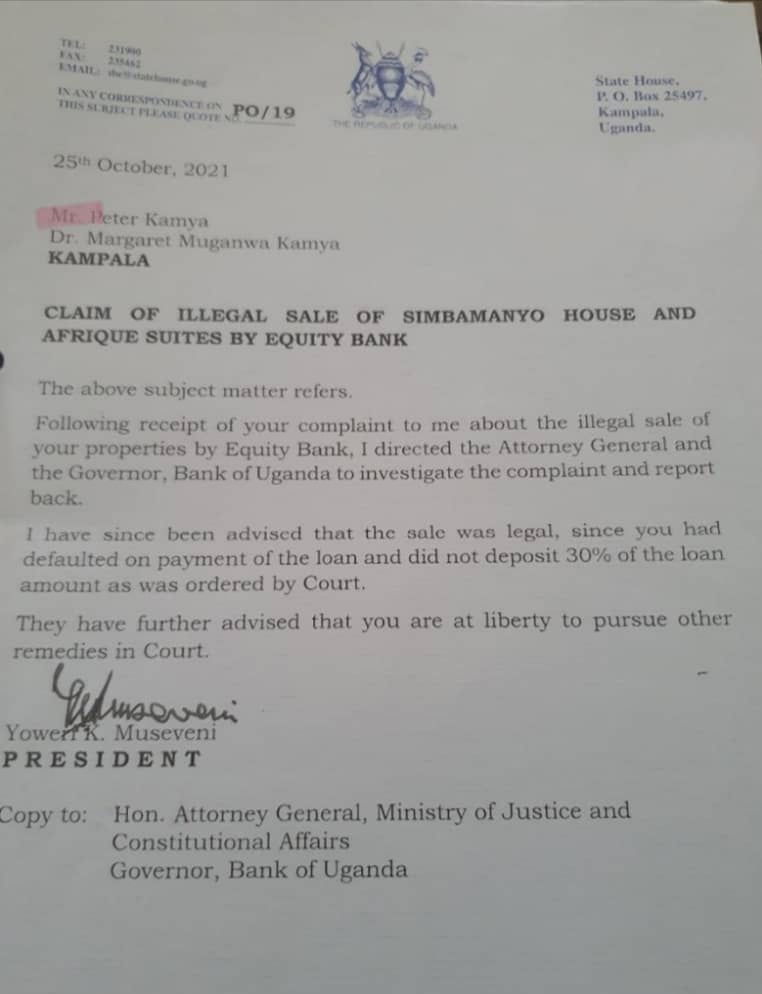 Last year Equity bank seized Simbamanyo House and Afrique Suits Hotel on Mutungo Hill in Kampala after Mr Kamya and his Simbamanyo Estates failed to pay outstanding loans to a tune of $10.8m (about Shs40 billion.

Although he went to the commercial court, his case was dismissed with cost and as a way of seeking help, Mr Kamya penned down a letter to President Museveni seeking his intervention. Indeed the president heard his cry and in September he directed the Governor of the Central bank, Prof Emmanuel Tumusiime Mutebile to investigate the circumstances under which the bank sold off the two buildings in what Kamya says was at a giveaway price.

In his letter to Mr Mutebile dated 3rd September 2021, President Museveni said; “I have been approached by Kamya and his wife Magrate Mugamwa who sate that were as BoU directed that there should be no foreclosure of mortgaged properties by Banks, Equity Bank went ahead and sold their property at low prices, that they had even offered to get they own buyers but all their efforts were frustrated.”

However after an investigation by BoU, President Museveni said he had been advised by Mr Mutebile together with the Attorney General Kiryowa Kiwanuka that Equity Bank’s move was legal and he should not intervene in the matter.

“Following the receipt of your complaint to me about the illegal sale of your properties by Equity Bank, I directed the Attorney General and the Governor of the Central Bank to investigate the complaint and report back.

“I have since been advised that the sale was legal since you had defaulted on the payment of loans and did not deposit the 30% of the loan amount as was ordered by the court. They have further advised me that you are at liberty to pursue other court remedies,” reads the President letter.

However it would be foolhardy for Mr Kamya to return to court once again, after damages and costs that are already piling at his desk,which could bankrupt him for good.

According to an interview Mr. Kamya did with one of the local newspapers, he said he was not challenging the sale of the property but the process.
He further said that he needs to meet with the president to tell him the whole story.

FARUK KIRUNDA: The blood of terror victims is in the hands of African leaders