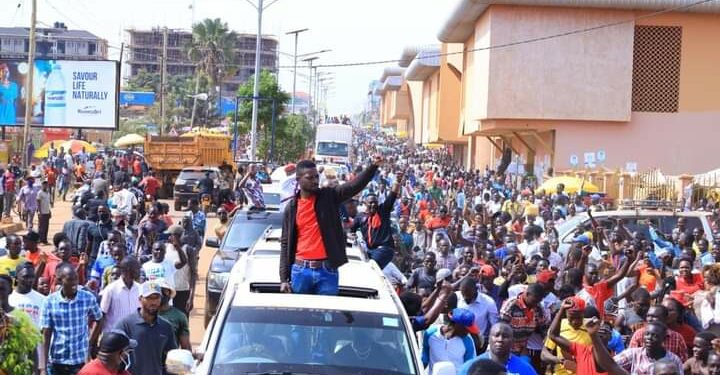 Opposition Kingpin Robert Kyagulanyi Ssentamu alias Bobi Wine will be taking his mobilization campaign to Mbarara after the double nightmare in Mbale and Lira last week.

After months of worrying silence, the former Presidential candidate rekindled his political activities with plans for a nationwide interaction with his supporters.

The move, according to party publicist Joel Ssenyonyi is intended to reawaken the public on the urgency of agitating for regime change.

The largely unsuccessful visits to Mbale and Lira seems to have resurrected the old confrontational Bobi Wine who had become a darling of regime change fanatics since 2018.

In Mbale, a booking at the local BCU FM radio was blocked, reportedly on the orders of the Resident City Commissioner ( RCC).

The planned meeting with party coordinators too did not take place, citing lack of clearance from security.

In Lira, Wine would meet the same fate, with area coordinators reporting to their principal that security had frustrated their efforts to seek clearance. They said when they reached out to the DPC, they were referred to the RPC, who in turn directed them to seek authorization from the Inspector General of Police.

What conspicuously stood out of the two encounters was warlike military deployment akin to what happened during the presidential campaigns.

Flying bullets, fleets of police patrol vehicles, and whistling of tear gas canisters in the air characterized the day.

And Bobi Wine to communicate to his key opponent – Museveni and the government that it’s time to revive the liberation war.

To make himself clearer, the frustration of Lira and Mbale fell short of deterring him from executing his plan. This time, he will take on security from Museveni’s backyard- Mbarara City.

Airtime already bought on one of the local radio stations, it’s highly unlikely that the NUP principal expects some friction with the security personnel in the Regional capital. He most likely knows it’s going to be bloody but it’s all he is looking for- War;-Antagonize me and expose yourself before Uganda and the world,is the message.