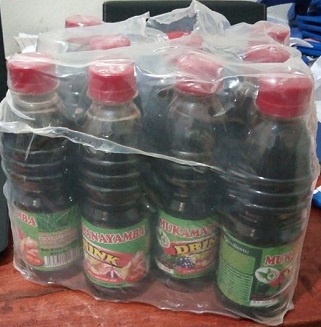 This follows yesterday’s Parliamentary committee on Trade, Tourism and Industries handing over Mr. Wabulembo to police in Mbarara for questioning, on adverts he oversees, which are considered by the committe to be misleading.

In a meeting between the committe and over 10 companies which produce soft drinks like rock boom, Kabiriti, Nalongo, mukama nayamba, power bank, akaboozi, bebe cool, Ekyama kya Work, Kampaho, the producers were tasked to explain the claimed capability of these drinks, to cure diseases like cancer, diabetes, pressure and sexual enhancement.
The Mps also asked the producers to explain how such drinks work, to completely cure these diseases.
Media adverts of these companies were each played on a projector at Parliament, but they fell short of required standards, like disclaimers for pregnant women, children and people with different diseases.

Mr. Wabulembo told MPs that they were running the said adverts, against the directive from Uganda Communications Commission (UCC), which stopped them from broadcasting such. This aroused serious concern amongst MPs.
He however explained that some of the said products, to some extent have the ability to enhance sexual performance.
Abdulsamad Lukyamuzi, the owner of “Kabode” drink said the product is not an energy drink, but a soft drink which is harmless.
Moses Ariho, the owner of “Kituzi” drink also contended that his drink is healthy and that it has passed UNBS and Tanzanian standards.
The committee also expressed serious concerns, about the products’ failure to have approval from the National Drug Authority (NDA), even as they possessed verifications from the Uganda National Bureau of standards (UNBS).

Mbarara city south MP Mwine Mpaka, asked police to detain Wabulembo, such that he is subjected to recording of a statement, and further questioning.
Harriet Busingye, a committee member who represents Hoima city in the 11th parliament asked Ugandans to be cautious while buying the said products. She acknowledged that the drinks have silently caused harm to Ugandans, and urged companies to stop luring the public through misleading adverts.
“I call upon everyone to be very careful, before you purchase these products. They have silently killed Ugandans,” she said, while addressing the gathering.

Mbwatekamwa Gaffa, an MP representing Igara East tasked the manufacturers of kabode drink to explain the contents of their product. He asserted that his blood pressure shot up after taking the drink during the recently 2020/2021 election campaigns.
UNBS said it will revoke licences of companies, whose products dont meet standards, while UCC pledged to engage media stakeholders to curtail the broadcast and publication of misleading adverts.