by Brian Mugenyi
in News, Politics
26 0 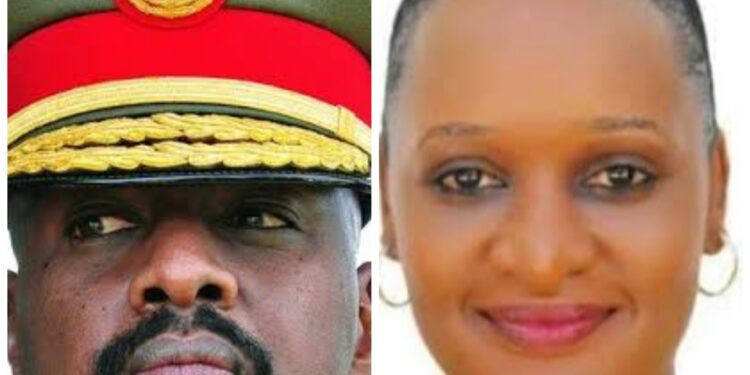 It is evidently clear that the first-son Lt Gen Muhoozi Kainerugaba might knock the presidential door come 2026 general elections if observation, research are true to serve journalistic purposes.

Muhoozi by nature has lived up to army, served the core notation in security operation and a good number of Ugandans especially the youth have received his alleged interest in Presidency with smiling faces.

NRM cadre Sarah Kiyimba is one of the people who think Gen Muhoozi should become Uganda’s President after his father Yoweri Museveni.

“There has been a fallacy that majority of Ugandans prefer to see a change in leadership. The change most of the Ugandans prefer is the one that might see the ruling party NRM losing all grounds which is impossible,” said Kiyimba.

Kiyimba vied for Nyendo/ Mukungwe parliamentary slot in the January 14th polls but unfortunately she lost to Leader of Opposition Mathias Mpuuga.

She is the daughter to Masaka City’s businesswoman Hajjat Brovad Kiyimba and she has lived up in business and political circles within Masaka City.

“The sayings that Mr Museveni and the first family are after solidifying themselves onto power are everywhere. It is not an offense for Mr Museveni to entrust his son Muhoozi as his successor. Before; we’ve seen several countries like DRC, Tunisia being governed by leaders fronted by their parents after quitting officially from power,” added Kiyimba.

As for clarity; Kiyimba says majority of the population today prefer to be ruled by leaders whom they share the same knowledge, dreams and aspirations.

“Mr. Muhoozi is a leader of the current trend and political age band. Ugandans must smart-up and embrace the blessing and timing Muhoozi has risen with. The political state of the country today prefers leaders who are good at resolving issues not creating conflicts amongst their subjects,” added Kiyimba.

Additionally, Kiyimba ponders that the Commander of Lands Forces’ presidential seat interest is well guided and timely since the country is facing a lot of trials and politically tribulations, socially and economically but he (Muhoozi) remains a potent leader with essential denominations whom they trust to steer steady progress in the country.

“He (Mr Muhoozi) will not be the first president in Africa to come from the first family as far as the continent’s politics is concerned. Several long serving leaders have done it before and their countries reaped big from them,” she added.

On the other hand, Kiyimba says that some sub-Sahara countries have experienced immediate succession by the son of the head of the state after their father’s death often leading to decades of role.

“This has happened before in many countries so it won’t be a natural phenomenon to Ugandans.”

BERNADETTE MUTUZO: All Ugandans must advocate for the Re-opening of Schools