by Mourice Muhoozi
in News
1 0 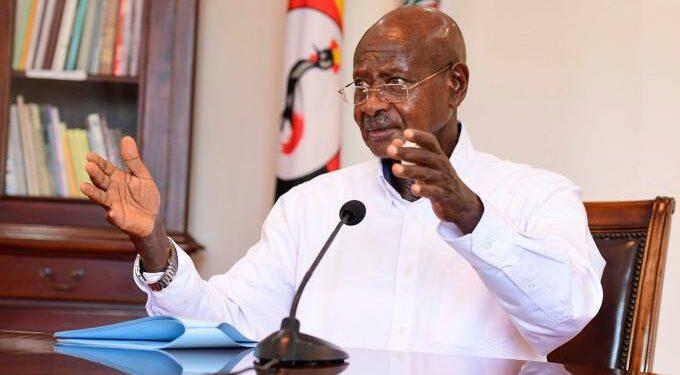 Museveni speaks out on Komamboga explosion. Calls it terrorist act

Street vendors on the streets of Uganda’s capital Kampala have today morning written a letter to President Yoweri Museveni, seeking the release of their products confiscated by Kampala City Council Authority (KCCA) operatives.

In their petition, these vendors sought the intervention of President Museveni into the operations of  KCCA, which they say, are characterised by brutal acts like floggings, brutal arrests and seizure of their products on a daily basis.

Through their leader Mr. Ismail Mubiru, these traders want the president to order the release of their products and also instruct KCCA operatives to cease their brutal approach while carrying out different operations in the city.

While talking to the press today morning, Mr. Ismail remarked that just like the government facilitated  and streamlined operations of other traders, they too should be facilitated, rather than being persecuted.

“We are Ugandans, just like you are seeing other city dwellers like taxi drivers, who were streamlined. Boda boda cyclists were also facilitated. we have seen these cyclists reach an extent of parking near the parliament as they wait for customers, but we vendors and  hawkers, we have been shown no mercy and sympathy,” he complained.

He called on the president to pardon them, by instructing the KCCA to release their products which are in their custody.

“We are  requesting you Mr. President, we are heightening our voices, you are the supreme leader, we plead for pardon  and mercy,” he added.

Nakanjako Rose, a fruit seller at Mutaasa-Kafero road, disclosed to this website today morning, that her items were confiscated twice, without any compensation.

“When they came here last month, they took all i had. I moblised my meagre resouces and bought other fruits. They were again seized. When i tried to resist, they whiped me. They are merciless people. There is nothing human about them. We come here to fend for our families but we are failed by these selfish people of KCCA,” she angrily remarked

Street vending in the capital Kampala is a life line for many city occupants, as an informal sector that exists out side the government regulatory and revenue frame work.

Ever since KCC was replaced with KCCA in 2011, street vendors have suffered a great deal. This  is due to governments attempts to regulate their informal businesses.

For instance from its inception, KCCA has never legally allowed street vendors to operate freely on city streets.

They have faced increasing persecution, characterised by seizure of their products. Some vendors are severly injured as they try to run away from KCCA officers, while others lose their lives.

For instance; in August 2017, Oliver Basemera, a hawker on one of Kampala streets drowned in a Nakivubo trench as she was running away from KCCA operatives, who were conducting operations against street hawking on the streets of Kampala.

During their daily operations, they work in fear of KCCA operatives, who can confiscate their items at any time and they go in vain.

Attempts by this website, to reach out to  KCCA officials for  a comment on this issue have so far proven fruitless.

Uganda’s exports to Turkey increased by 30% in 2021- Embassy

Uganda's exports to Turkey increased by 30% in 2021- Embassy