The eyewitness, a waitress at the bar, claimed that the men she saw were dressed in National Unity Platform (NUP) branded outfits.

by Andrew Baba Buluba
in News
25 2 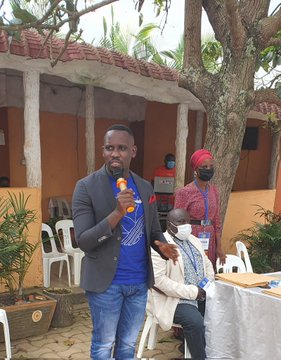 National Unity Platform has dismissed with contempt claims that their party was behind the Saturday night explosion in Komamboga.

Testimony by an Eye Witness’ about the appearance of assailants that placed an explosive material at Digida pork joint in Kyanja Komamboga on Saturday night has left many people confused and shocked.

The eyewitness, a waitress at the bar, claimed that the men she saw were dressed in National Unity Platform (NUP) branded outfits.

However, NUP spokesman, Joel Ssenyonyi, says, those are attempts by the state to frame their leaders as causing insecurity in the country.

Referring to a recent newspaper headline which said, “Police catch ISO spies in petrol bomb attacks”, Ssenyonyi wrote on Twitter, “Remember this Headline weeks ago? And now we hear of plans to arrest & implicate more NUP leaders, coupled with Mr. Museveni’s plans to scrap bail. Be strong Uganda, it’s always darkest before dawn. Our prayers go out to the bereaved families & those injured in the Komamboga explosion”.

Komamboga sits on the border with Kyanja, under Nakawa east, represented by Ssenyonyi as a member of parliament. Hours before the explosion, Ssenyonyi had addressed residents in Kyanja over insecurity in the area.

He tweeted, “Today we met Kyanja residents on how we can better tighten our security given recent incidents in the area. Afterwards, we went to offer some support to Bukoto residents who lost property in a 3am fire. Fire-brigade didn’t come, but locals put it out before it spread to many houses.”

At around 9pm on Saturday, at least two people were reported dead, and scores injured following a blast at pork joint in Kyanja, Kawempe Division in Kampala.

While narrating the grisly incident to the media, an unidentified lady, a staff at the eating joint said the suspected assailants had gone to the happening place like ordinary customers.

She says that the group, about three in number, including one who was putting on a People Power T-shirt, first asked for a bucket of beers.

When the waitress who had served them asked to get the money from them those seated on the neighboring table assured her they would return since they had left behind their beers. And indeed, they came back.

Upon asking for the money, the man in a red T-shirt, who had all along been looking suspicious asked for the exact amount she owed him and threw the receipts at her when she issued it.

After paying, another person, presumably a colleague of the trio came with a bottle wrapped in a black polythene paper and placed it under the table on which they were seated.

This, she says was witnessed by many of them including their boss.

Moments after the suspicious characters had left, the explosive went off.

This particular worker however maintains that the guy presumed to be the day’s ring leader is not a stranger for she remembers seeing him at the spot before yesterday’s incident.

Last week, the United Kingdom Intelligence warned of a possible terror attack on Uganda before police downplayed the possibility when they said they had not elevated their terror alerts.

The suspect was captured with elementary bomb materials.

At the burial of General Lokech in August, General Yoweri Museveni said the state of terror attacks in the country were linked to rebel outfits – the Allied Democratic Forces (ADF) who have terrorized the country since 2003.