Sudhir has threatened to sue Mrs Kasule who his lawyers have identified as frustrating the pursuit of Justice for the billionaire and his companies. 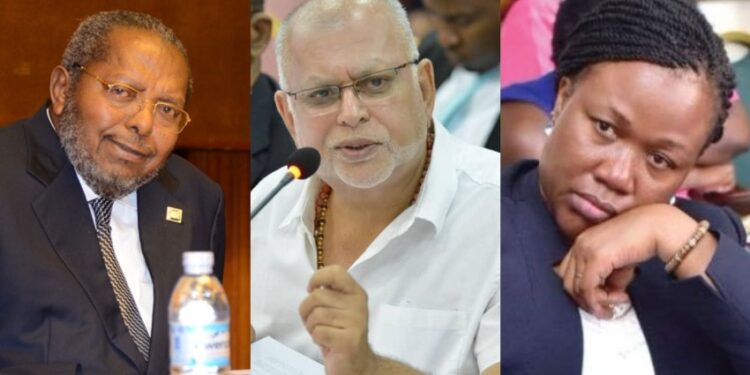 Mrs. Margaret Kaggwa Kasule will personally answer to the court why she is frustrating lawful court processes if a suit slapped on her by Ugandan billionaire Dr. Sudhir Ruparelia is successful.

Sudhir has threatened to sue Mrs Kasule who his lawyers have identified as frustrating the pursuit of Justice for the billionaire and his companies.

This is a new one since Sudhir has not in the past targeted individuals in the Bank of Uganda as he battle to clear his name from wrongdoing before Crane Bank.

In a letter dated Tuesday, October 12th, 2021 Dr. Sudhir points out Mrs Kasule as acting unprofessionally in her conduct manifested in her efforts to frustrate lawful court processes.

The notice says; “Our client was the successful party in Court of Appeal Civil Appeal 252 of 2019 Crane Bank Limited (In Receivership) vs Sudhir Ruparelia & Another where the Court of Appeal upheld the decision of the High Court in High Court Civil Suit 493 of 2017 to wit that the 131 Respondent had no locus to institute proceedings against the Applicant and its plaint did not disclose a cause of action”.

The BoU legal chief is accused of trying so hard to continuously frustrate the receipt of documents from Sudhir’s lawyers and misadvising the BoU in its battle over Crane Bank.

“Take notice that our client has thus decided to institute legal proceedings against you for contempt of court orders for your role in the illegal liquidation of our client’s Bank,” the KAA notice states.

Sudhir also accuses Mrs Kasule of advising Bank of Uganda to place Crane Bank into liquidation, a ruling which went ahead to be determined by the Supreme Court.

The court ruled that Crane Bank ceased to be a financial institution, by notice dated 16th October 2020 and therefore could not be liquidated.

Sudhir says Mrs Kasule without staying the execution of the judgment of the Court of Appeal, advised the Central Bank to apply for a temporary injunction restraining the billionaire from filing resolutions concerning Crane Bank Limited with Uganda Registration Services Bureau vide MA No. 32 and MA No. 33.

Sudhir says, “You are the brain that has been behind all this saga of illegally liquidating Crane Bank with the sole intention of depriving our client of the fruits of the orders of the Court of Appeal. Further by insisting to file a suit showing that Crane Bank is in Liquidation, which the Supreme Court has held that it can’t be done, your conduct is illegal, mala fide, and in contempt of orders of the Court of Appeal and the Supreme Court”.

“The interests of justice, therefore, demand that a mandatory interlocutory injunction is issued to restore the status quo that existed at the time of filing Civil Appeal No.07 of 2020,” the notice continues.

“In the present case, the contempt by the 2nd respondent relates to conduct which perverts the course of justice. The attempt at circumvention of the decision of the Court of Appeal by altering the status of the 1st respondent from Crane Bank (in receivership) to Crane Bank (in liquidation) was in our view aimed at impeding or perverting the course of justice before this court and the same amounted to contempt.”

Sudhir however expressed optimism by acknowledging that the legal chief would respond and offer her services to the company with promptness.

“We hope that going forward, you shall receive our letters and proceedings in a timely manner”.

Dr. Sudhir Ruparelia has been engulfed in a series of commercial battles with the Bank of Uganda since 2017, which he has won, one at a time.

BoU of Uganda, to save face, should have settled the Crane Bank long ago, but as chief legal adviser of the Central Bank is yet to come to terms with the exhausted court processes which wound up in the highest court in the land.