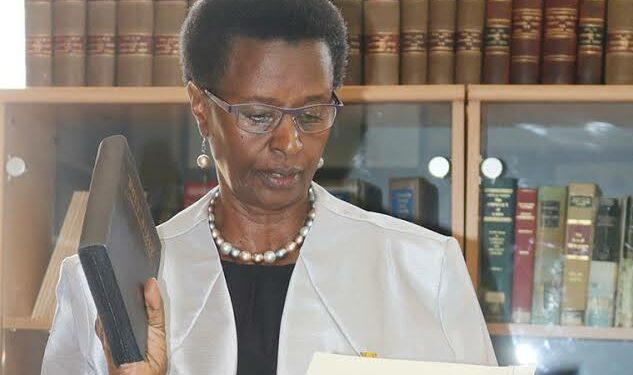 Many got to know that Dr. Violet Kajubiri is President Yoweri Museveni’s sister after she was involved in a nasty car accident that happened December 2016 in Nyamitanga along Mbarara Isingiro road which left her with severe injuries. She was travelling along with former Kampala City Council Authority (KCCA) director for physical planning, George Agaba who died on spot.

To begin with, Dr.Kajubiri was born at the time when Ankole celebrated 50 years (Golden Jubilee). Like the President, her actual date of birth is not well documented.

In 1955, Kajubiri was struck by polio which impaired her legs. According to Museveni when eulogizing his deceased mother, their father was hesitant to push her to trek to school which was many kilometers from their home but the mother insisted that their daughter attends school where she excelled and won a scholarship to join Bweranyangi Girls School for the secondary education.

From Bweranyangi Girls School, she attended Makerere University in the early 1970s and she used to study with presidential hopeful and one time aspirant, Olara Otunnu at the university. Kajubiri was based at the Zoology Department at the time.

After attaining a bachelor’s degree in science at Makerere University, Kajubiri joined the University of Hohenheim, Stuttgart, Germany where she attained a Masters degree in Science and then a Doctor of Philosophy (Ph.D.) at the same university.

The well-educated Kajubiri has lived out most of her life in Europe. Her only closest connection to State House is the fact that her son, Dr.Joseph Ekwau is the presidential advisor on veterinary issues.

Dr. Kajubiri is married to a German national; this could explain why Uganda is not her normal pastime area.

Currently, she is the Deputy Chairperson of Education Service Commission (ESC).

Formerly, Kajubiri worked with Presidential Visitation Committee of Public Universities in Uganda and between 1991- 1998, she served as General Secretary Wildlife Club of Uganda/National coordinator.

Unlike many people with close ties with the first family, Kajubiri has never been mentioned in any scandal neither does she have any controversy on her profile. She keeps a low profile and that is why many people don’t know her as president Museveni’s sister.

 Worked with Consultant for state of Lower Saxony on Education and Development from 2008-2009.

 From 2005-2007, she worked with Presidential Visitation Committee of Public Universities in Uganda.

 From 2001-2004, she was a Consultant for Protestant Development Aid in Germany.

 From 1991-1998, she was the General Secretary Wildlife Club of Uganda/National Co- ordinator.

 From 1987-1990, she was a Research fellow Ministry of Education for the State of Bremen, Germany.

 From 1974-1977, she was special Assistant Department of Zoology Makere University.

– 1996: Member of Board Worldwide Funds for Nature (WWF-Int)

Your girlfriend/wife is sleeping with someone else, if she does these 9 things