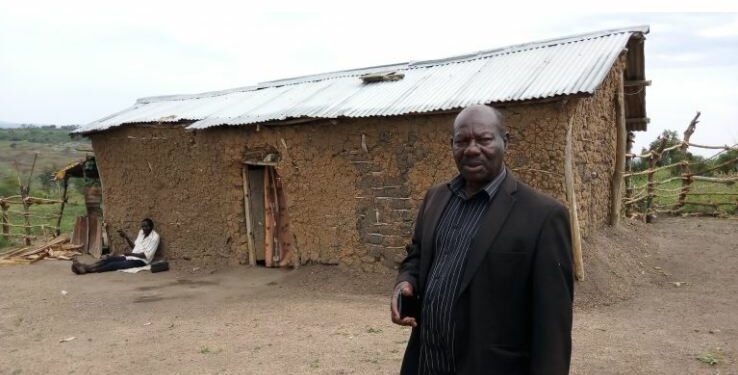 Courts of law are the only places where one runs in search of settlement of grievances. It’s where both the weak and the powerful are meant to be guaranteed justice according to the 1995 Constitution which provides for equality before the law for all citizens.

For Aloysius Kakande however, the narrative has changed in the seven years of a barren search for fairness that has produced nothing but hopelessness and despair.

The retired civil servant accuses City tycoon, James Ruvima, the proprietor of Afya Oils of grabbing 380 acres of land from him.

The land in contention is located on Block 138 in Gomba. For 7 solid years, the 80 year old physically frail Kakande has waited for his case to be resolved by the Courts in Uganda with no success.

James Ruvima on the spot

Ruvima is also Accused by Kakande of using SFC soldiers attached to Presidential Security to intimidate and harass him.

In 2014 (34 years) after he purchased the said land, Ruvima appeared with a land title from Lands indicating that he had purchased Plot 8. The series of surveys conducted by the Mpigi District Surveyor indicated that Plot 8 was chopped off Kakande’s Plot 2 and 5.

When we dug deeper, we discovered that the administrators of the Estate of the late Edward Nsimbe, (the original owner of the land), Jane Nanjovu, and Norah Nasejje had sold 380 acres to Ruvima located in Plot 6.

According to Kakande, while purchasing the land, Nsimbe declined to sell plot 6 to him since it had many squatters on it. His daughters, named above decided to offset Plot 6 to Ruvima knowing it had squatters on it.

What we envisage is that when Ruvima learned that it would a hard task to settle on plot 6 that has scores of residents, he reportedly maneuvered his way to have plot 8 created for him out of Kakande’s plots 2 and 5.

In a letter dated 8th July 2014 that we have, then Commissioner for Land Registry, Sarah Kulata Basangwaordered after reconstruction that a new certificate of title measuring 380 acres be made in the names of Jane Nanjovu and Norah Naseje, the Administrators of the estate of Edward Nsimbe.

Kakande’s surveyors, Wemo Consultant, and Planners following a court order on 24th February 2015 released findings of their surveys (REF:WEMO/Adm/SR/011/15) that were carried out on Plots 2, 4, 5, and 8.

“We have therefore established beyond doubt that Plot 8 falls both within boundaries of Plot 2 and 5 which belong to Aloysius Kakande as per copies of title provided,” wrote F. L Lukyamuzi the field surveyor. All the three location surveys ordered by Court established that Kakande owns the said land.

What puzzles many is the findings from the search office. The latest statement of search conducted on 25th August 2021, shows that the Land at Luzila Gomba Block 138 Plots 4& 5 measuring 750 acres belong to Aloysius Kakande registered under INST KLA 121173 on 5th November 1986.
But apparently, James Ruvima also has the certificate of plot 8 that seats on Kakande’s plot 2 & 5 as the rightful owner.

As the matter awaits the court’s final say, Kakande accuses Ruvima of defying court orders regarding conducting any activities on the disputed land.

In a complaint letter addressed to the RDC Gomba, Chairperson LC V, the District Police Commander, DISO, Gomba, Minister for Lands and Police Land Protection Unit, Kakande said the actions of Ruvima was a threat to positive living.

“Ruvima brought in his manager Frank Nkwasibwe who is terrorizing my herdsmen. He has also ferried in over 20 people from Mubende who are slashing all grass, cutting trees, and burning charcoal,” said Kakande in the letter.

He said the “men” had also cleared huge chunks of land ready for planting maize. He wondered why land invasion was taking place during lockdown despite a directive from Lands Minister against conducting any land matters during COVID 19 lockdown.

The Resident District Commissioner Gomba Steven Asiimwe who chaired the security meeting held on September 1 2021 cautioned locals against engaging in land matters that are before courts of law.

The RDC warned the locals in Bulwadda to desist from defying court orders. He said: “Once the court has ordered that nothing be done, no one must do any activities on the said land until court decides on the matter.”

He was ordered that the workers of Ruvima stop forthwith any further deforestation, charcoal burning that degrades the environment, and further fencing of the disputed land.
Gomba District Environmental Officer and Forestry Officers said the delayed rains in Gomba was due to the massive tree cutting by workers of Ruvima.

The RDC urged Kakande to fast-track the court cases with his lawyers to avoid bloodshed.

He urged the locals to learn to live in harmony with neighbors especially regarding allowing each other’s animals to access pasture and water.

The Bulwadda Parish Councilor Kateregga Emmanuel castigated Ruvima for using force to construct a fence around the disputed land and for denying animals access to the only water point in the area.

The meeting was also attended by the OC Kabulasoke Police Station ASP Aha and officials from the Police Land Protection Unit in Kampala.

Our attempts to get a comment from Ruvima did not yield as he referred us to his lawyers. The lawyers however declined to speak, saying they were not willing to comment on a matter before the court.