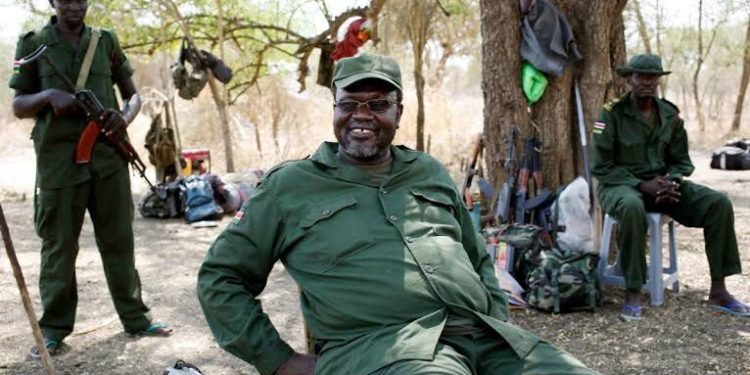 Deadly fighting erupted Saturday between rival factions of South Sudanese Vice President Riek Machar’s SPLA-IO after his foes in the party said they had ousted him as leader, the latest twist in the nation’s troubled decade of independence.

At least 30 people were killed in the clashes in White Nile State that borders Sudan, Machar’s military spokesman said in a statement, claims that could not be immediately confirmed.

There was no immediate response to requests for comment from his side, but his deputy spokesman Chuol Deng told South Sudanese station Radio Tamazuj that Machar’s forces had instigated the attack.

“We have captured some vehicles from the attackers. We have so far lost one soldier and two others sustained injuries,” Deng said.

Many casualties
In a statement, however, Col Gabriel said Gen Dual’s “anti-peace” forces moved out of their trenches in Magenis at about 6.30am and launched aggressive attacks against them in Gezan.

“The SPLA-IO forces responded in self-defence and repulsed the aggressors back to Magenis, killing two major-generals and over 27 enemy soldiers,” he said.

He added that the SPLA-IO destroyed equipment including one armored personnel carrier and a ZU-23 autocannon, and captured one Ural mounted with a ZU-23 and more than 20 AK 47 rifles.

He added: “The SPLA-IO is aware that Gen Dual and Lt Gen Johnson Ulony were evacuated to Sudan. The SPLA-IO leadership requests the Sudan government to maintain its neutrality by keeping the two in Sudan and not allowing them to come back and cause more insecurity in the area.”

He also asked forces left the SPLA-IO to return to it, under Machar’s leadership.

Peace deal at risk
Tensions boiled over this week in the SPLA-IO after Machar’s rivals declared they had deposed him as party chairman and commander-in-chief — a move his allies dismissed as a “failed coup”, insisting he was still in full control of the party.

The fighting could put further pressure on an already fragile 2018 peace deal between Machar and his old foe, President Salva Kiir, that ended five years of brutal civil war in the world’s youngest country and led to an uneasy coalition government.

The VP himself this week accused “peace spoilers” of engineering his removal.

The 68-year-old, a wily leader who survived years of bush warfare, attempts on his life and stretches in exile, served as vice president alongside Kiir in the first government post-independence from Sudan in 2011.

But the pair fell out and Machar was sacked two years later. Troops loyal to each man turned their guns on each other, and South Sudan descended into five years of civil war.