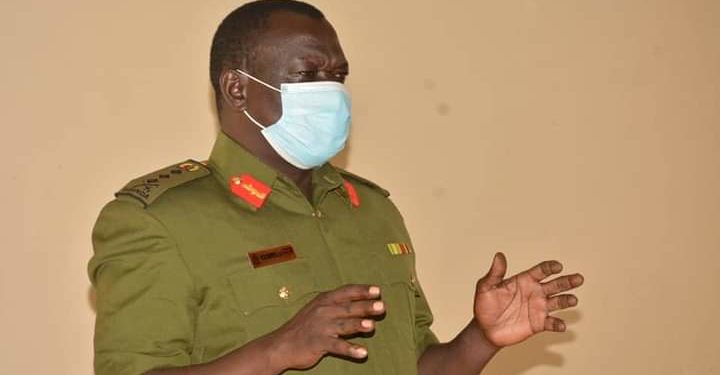 UPDF Deputy Chief of Defence Forces Lt Gen Peter Elwelu has cautioned UPDF officers and soldiers to always secure their end during their tenure of service in the force by excelling in whatever duty they are given.

Gen Elwelu said on Monday 2nd August 2021 while presiding over the handover and takeover ceremony of the Commandant Kaweweta cantonment between Maj Gen Christopher Kazoora and Brig Gen James Ruheesi.

“Gen Kazoora you do not owe this country anything, you have served diligently ,as one of our elders.You have mentored us, you have left this place and Uganda in general when its peaceful,” said Gen Elwelu.

He appealed to UPDF officers to emulate the example of Gen Kazoora who has handed over office peacefully and due for retirement when walking well. ” Gen, you joined this UPDF/NRA when you were a youth but thank God you have managed to leave it when you are walking normally with both your legs, it has not been your power but it has been God’s grace. UPDF is proud of you our elder General because you found Kaweweta Cantonment as a bush in 2011 but you have left it shining.”

Gen Kazoora thanked UPDF leadership for giving him support and advice for the years he has served in the Army. He added that he wouldn’t have done what he has done without the guidance and support of UPDF leadership.

Brig Gen James Ruhesi, the incoming caretaker Commandant of Kaweweta cantonment in his remarks thanked the UPDF leadership for entrusting him with this new office.

He also pledged to work effectively hand in hand with the management of the Cantonment in order to fulfill the aims and objectives of the UPDF leadership.

DR. INNOCENT NAHABWE: Wake up, get back to work and save for the next lockdown