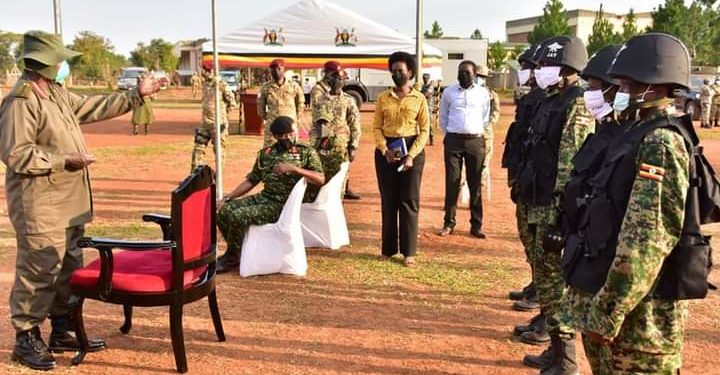 The President of Republic of Uganda and Commander in Chief of Uganda Peoples Defence Forces ( UPDF) , HE Yoweri Kaguta Museveni on Friday officiated at the pass out ceremony of UPDF soldiers who concluded a 6 months Counter Terrorism Warriors Course at Nakasongola Cantonment in Nakasongola district.

The President congratulated the graduands upon the completion of the course, cautioned them against living reckless lives, and urged them to maintain discipline , patriotism,integrity and self confidence as they continue to strengthen their military capabilities in combating any situation.

The President reminded the soldiers to ensure that they put duty to their Nation first.

President Museveni also laid a foundation stone at the School Of Military Intelligence (SOMI) and Security at Migyeera, Nakasongola district and also promised to support it to completion.

The Chief of Defence Forces Gen Wilson Mbasu Mbadi also congratulated the graduands upon fulfilling their mission course of counter terrorism and thanked President Museveni for the wonderful and strong efforts in boosting and strengthening the Defence capabilities through professionalising both physical and mental combat operations.
The CDF added that the course was intended to produce a high level of technical and tactical combat capability in order to excel in any combat operations amidst physical and mental strength.

Gen Mbadi also thanked the Commandant of School Of Military Intelligence and Security and the instructors for their advanced guidance towards refining professionalisation and capacity building enhancement of graduands in military Fields.

He reiterated the President’s caution to the soldiers to live responsibly and avoid reckless behavior so as to meaningfully contribute to Uganda.

The Chief Military Intelligence (CMI) Maj Gen Abel Kandiho also congratulated the graduands upon the completion of the course and thanked the President for professionalising the UPDF institution that continues to attract nationals of various academic excellence which would rate the national army amongst the best public technological innovaters both at regional and international level.

Gen Kandiho also remarked that UPDF intelligence needs more support to enable smooth running of the Chieftaincy’s modules given by UPDF leadership both in and out of the country.

Private Twongeirwe Kenneth emerged the overall best student, Private Imalingat Gabriel was the most professional while Private Bwambale Rowen was the most disciplined student. Private Namuhoma Madina was awarded the best female student.

IDENTIFIED: Here is the woman behind the training of young girls to have sex with dogs in Muyenga