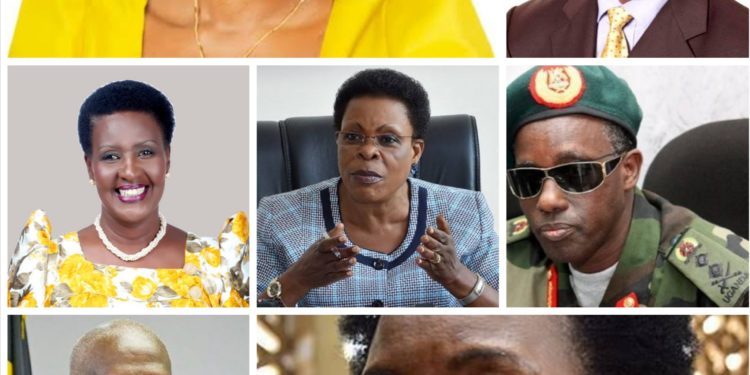 On Monday 3, President Yoweri Kaguta Museveni dissolved his cabinet and bid farewell to it’s members ahead of his swearing-in.

As he prepares to take the mantle for the next five years, the Head of State is expected to announce his new Cabinet and State Ministers shortly after he is officially sworn in on May 12. Sources privy to business at State House told this news website that the list ins and outs have already been finalized, only awaiting publication.

This publication will thus focus on who is likely to retain their positions on the most coveted arm of government and who could be thrown out.

Ssekandi, the country’s number two for a decade is the surest bet to miss out on the next cabinet list. At nearly 80 years, Museveni will most likely find it hard to retain him as second in command especially after he failed to make it to the next Parliament. It’s thus unlikely that he would fancy the possibility of having an ex official VP. The dismissal performance of the National Resistance Movement- NRM in Buganda in the January 14 general elections only serves to complicate things for him further.

In government since 1986, there have been rumours that Rugunda has sought to retire from government.

At 73 ( born 7 November 1947) , the reports are not so hard to believe especially regarding the over four decades glittering career in politics. A student leader since his days at Makerere University, Rugunda would go on to become a popular mobilizer for then ruling party UPC. Before his death, former president Apollo Milton Obote lamented over Rugunda’s involvement in Museveni’s government for he had once tipped him to be an important part of UPC’s future leadership.

When NRA captured power in 1986, Ndugu Rugunda joined the inaugural cabinet and has never looked back since.

The Physician-cum politician has been Prime Minister of Uganda since 2014. Before the current appointment, he was Minister of Foreign Affairs from 1994 to 1996, Internal Affairs from 2003 to 2009, Permanent Representative to the United Nations from 2009 to 2011 and Minister of Health from 2013 to 2014.

Having been a Member of Parliament for his native Nakasongola since 1989 and Budyebo County since 2011, the veteran 68 year old politician opted to call it quits to elective politics. Although he said he would continue serving the ruling party, whether he will be in the next cabinet is highly debatable.

Although a close generational ally of President Museveni since his days in the bush, her defeat at the hands of National Unity Platform’s Hillary Kiyaga could greatly impact on the outgoing Mawokota South MP’s chances of making it to the list.

With many of Museveni’s Ministers from the Central losing in the previous election, nothing should be taken for granted at all.

Ssempijja is just another of the many NRM cadres that didn’t survive the Bobi Wine induced storm on Jan 14 which makes his chances of returning to the next cabinet slim.

Having been into active politics since the early 1980s, Samuel Kahamba Kutesa announced his retirement from active politics early last year. He thus gave way for his daughter, Shatsi Musherure Kutesa who will be carrying on his commendable legacy as Mawogola North MP for the next five years and possibly more.

His decision has since been interpreted as a hint on his desire to completely keep away from politics in favor of a stress-free retirement. This thus points towards a possible exit from the cabinet.

Having unsuccessfully tried to regain Rubaga North Parliamentary seat (represented the area between 2006- 2011), a sharp axe has been dangling above Kamya’s political neck since. Having joined the cabinet about two years ago from the Opposition, winning a slot in the next parliament would have brightened her continuation in the cabinet but voters instead preferred NUP’S Abubaker Kawalya.

He is one of the veteran cabinet members who have reportedly asked the CEO- General Museveni to let them go and enjoy their retirement. At Justice and Constitutional Affairs, Kamuntu was appointed during the December 2019 mini reshuffle and only assumed office the following month from .Gen. Kahinda Otafiire.

Although she seems as Museveni’s preferable girl, this may not be enough for one to confidently tell if she will retain her cabinet slot.

Butime is also one of the most senior members of the cabinet who could throw in the towel to go into retirement.

General Elly Tumwine’s contribution to this government is not debatable. Having fired the first shot in the invasion at Kabamba against Obote II government, he earned his place among the regime legends deservingly.

But having been voted out by the Army as their representative in Parliament, he could be headed for an honourable retirement from politics and hence he might have had his “last supper” at State House on Monday.

The over 3 decades as MP for Kiboga district unceremoniously came to an end early this year. Once tipped for big things in the next government, it’s now clear Nankabirwa will have to watch the House‘s business on TVs just like the majority of us.

Resultantly, any chances of keeping a place in the next cabinet could be a subject of devine intercession.