by Brian Mugenyi
in News
9 0 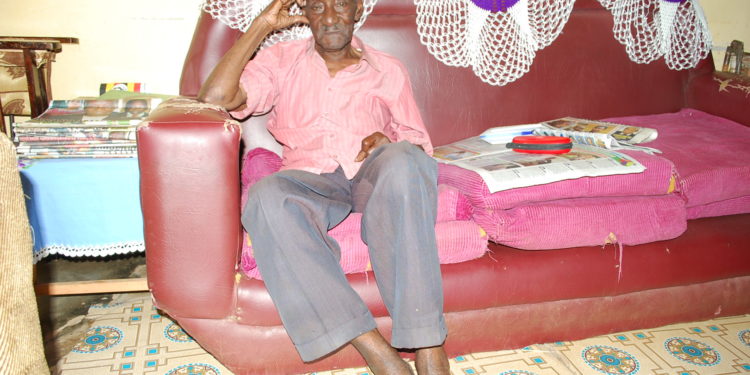 If Ssalongo John-Johns Sserwanga had not practiced journalism, his childhood wish of getting close to the late King of Buganda Kingdom Sir. Edward Muteesa II would have remained a dream.

For more than 69 years in practice, this 94 year old scribe has maintained his love for the profession to date. He has mentored more than 100 journalists in different disciplines although some of them died while others retired and focused on personal engagements.

Sserwanga formerly worked for Uganda Eyogera, a weekly newspaper that had head offices in Kibuye-Katwe, a Kampala suburb in early 1950s.His life was always at a stake for publishing controversial stories against the state.

WatchDog Uganda paid him a visit at his Kyawunyi village near Nabinene Trading center, Kyotera road-Masaka and we had a chat with him.

Apart from a big house that sits on a three-acre-piece of land, there’s still more than what meets the eye.

From the ample parking space, a good compound design with mowed grass, trees and flowers. For a stranger may think it’s a botanist’s home setting. He’s very neat and a man of style. The pictures and paintings on the walls in the sitting room answer all the questions about his personality.

He was born in Mawokota County to Mr. John Mukasa Yakuze and Mrs. Helen Yakuze. Sserwanga is also married to Ms Annet Sserwanga and they are blessed with many offsprings.

In 1935-1941, he attended Kitovu primary school and later joined St. Henry’s College Kitovu for his secondary level. By then school fees were shs.120 per year including meals, and uniform (White shirt and khaki trouser) before he joined the East African Army in 1942.

“At Kitovu no one had shoes unless he comes from a royal family. It was only Kabaka’s children namely David Wasajja, Henry Kalemera and Richard Lumama who had the prestige,” Sserwanga says.

He further added that the shoes were not so common since they were expensive. “During then, it would be construed as though you undermined elders, family or community members who never had them,” He explains.

Being a boys’ school, all chores were done by men, from preparing food to washing dishes and other activities.

However, at the age of 14, in senior four he was among the boys who were recruited by the British Government and given training to assist them in fighting the Germans in World War (II).

“They said there was an opportunity for those interested in joining the Britain army. Therefore I had to go. I went with my belongings to Nairobi-Kenya where we got different military drills in preparation for the war against Adolf Hitler,” he said.

Adolf Hitler was the leader of Nazi Germany from (1934-1945) who also started World War (II) and used to supervise harsh policies that resulted in millions of deaths.

According to him, Hitler in the war was a wild drug addict who wanted to smell blood of a dead person. Indeed, he treasured killing people,” Sserwanga adds.

When he reached Nairobi-Kenya for training, his trainers advised him to join the army medical department since he was still young.

He was then sent to Tororo military Hospital to acquire more practical skills, but it took him few days to learn and went to Sri Lanka and in Burma-Asia. It was a- two-weeks voyage from Mombasa to Ceylon, Southeast Asian using a ship.

“The war was tough my friend. We used to collected casualties and transport them to the nearby hospitals for treatment. It was killing or be killed situation,” Sserwanga recounts.

In 1945 the war ended in favor of them ‘Britain’ by then, and he came back in Uganda with his friends who died some years back.

“In army we learnt many things including computer studies, driving cars and medical training too. I had to gather from there and practice them also here also in Uganda,” He says.

In 1950, his desire to see Kabaka was overwhelming.By then he was Kabaka Muteesa (II). Since Kabaka was celebrating his birthday at his palace-Mengo, he decided to attend the ceremony.

He said it was on that day he envisioned the solution on how one can get nearer to the Kabaka. “Becoming a journalist was the answer,” he said.

“I saw journalists on Kabaka’s ceremony, moving freely with their recorders, cameras and journals nearer to him, so I decide to start practicing journalism by myself,” Sserwanga said.

When he came back to Masaka, he started writing and sending stories to Uganda Eyogera newspaper headquarters.

He used Taxi Drivers who then conveyed his articles to story editor Mr Aloysious Lubowa, in Kampala.

After his continuous commitment in reporting stories every day, Mr Lubowa sent him an official letter through post office, inviting him at their offices.

“I was very happy with that bidding; I went to see why the editor needs me there. But I didn’t know him and he also had no crew on me, I was just reporting stories and then read them in newspaper,” he said.

Sending stories worked miracles for him; he was appointed to be a staff member of that newspaper and granted a monthly fee of shs.300. Since then his dream of becoming a journalist was realized.

In 1958, he was then persuaded to join Taifa Empya and Daily Nation publication in Nairobi-Kenya.

“Newspapers were published once in a week. Technological knowhow in printing was low and practicing journalists were also few, they were only six reporters in Uganda,” he explained.

It was in 1961 when Sserwanga joined Ssekanolya-Mengo newspaper as a chief reporter and photographer. His dream to work for Kabaka was realised.

He became a versatile journalist there, ready to work and available all the time. This impelled Kabaka to appoint him as his personal photographer; he was a naturally gifted photojournalist.

Things to do with photos and reporting on Kabaka’s ceremonies, it was Sserwanga’s responsibility.

In 1962, he was appointed as an administrative secretary for Kabaka Yekka (KY), a monarchist political party in Uganda led by Kabaka Muteesa II.

However, in 1966 he reported a story in Sekanolya newspaper entailing ‘Obote agyekuno gavumenti ye kutakalya Buganda,’ loosely decoded; Obote must move his government away from Buganda’s property.

“I used to be with Kabaka Muteesa on weekends and he told me of his secrets. As a way of threatening Obote for disrespecting him ‘Kabaka’, I reported a story on what was discussed in Lukiiko meeting, which annoyed him,” he said.

It was the story that brought about a deep political crisis in Uganda. The proceedings on this crisis ended with the Uganda Army attacking the palace on May 24th.

Sserwanga enunciates that the army was determined on seizing and killing Kabaka Muteesa. He then advised one of the royals in the palace to take care of the safety of the Kabaka as they plan for his exile since the army could not hold on to fire bullets.

Sserwanga adds that Kabaka was able to escape into exile. While on hiding, Kabaka sent Mr Sabastian Munila Nsanafu, a gentleman who housed him in a mad house in Lugusulu village, Mawogola County and informed him that he ‘Kabaka’ is moving to London.

Ssabastian told him over that plan, and it was Sserwanga who disseminated that information to Kabaka’s subjects.

In 1971 Sserwanga survived persecution by then President Milton Obote soldiers for reporting a story which Obote said it was criticizing his governance.

However, in 1976, Sserwanga went with President Milton Obote as a journalist in London and reported what was discussed in Sovereign Union Conference.

Away from journalism Sserwanga also a catholic believer, came back from London and decided to settle a permanent house in Masaka. He got a job and served as a court broker in the Masaka High Court.

Sserwanga has also worked as court assessor and an interpreter.

At 94, one would think of retiring from public services. Nevertheless this fox is still practicing journalism at Masaka based local radio station, Buddu Fm for over 10 years now.

He is a senior reporter and also presenter for the Ebirwaawo byelabira weekly program where he debates on historical occasions and it takes place from 6am-7am every Saturday.

“I know my ride ‘BodaBoda,’ is as old as me, but I have no problem in riding it. I wake up early in the morning, then dress up in my smoothed suit and travel to Masaka,” he said.

He credits his boss Mr. Ronald Ssegawa Gyagenda, the Managing Director of Buddu Media Group, for availing him an opportunity to stay in the system even when his age dictates retirement.

Sserwanga says that journalists today have compromised the profession for such little things as tips, lifts, feasts; gifts and other things “which was not the case in our days,”.

He further advised Journalists to avoid being used by politician to fight their wars urging them to stick to the core ethical code of conduct.

“It was possible for Obote to bribe me to write stories in favor of his government but I chose to stick to the principles,” He said.

He has nurtured many successful journalists here in Uganda and even abroad.

Sserwanga is known for being an informed man on historical events in the world. He is also a down to earth person who hates corruption.