by Brian Mugenyi
in News, Politics
20 1 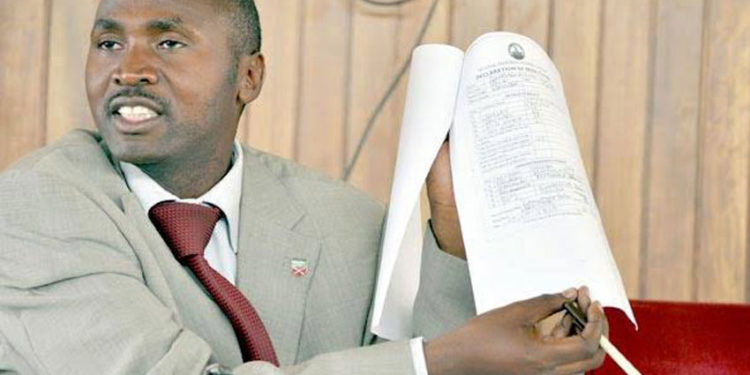 Lwemiyaga parliamentary seat was a no go zone for many politicians but those that stepped up and stood for it like Theodore Ssekikubo managed to go home with smiling faces.

Not even President Museveni could miss the victory of his prodigal son. Majority voted for Ssekikubo and the few that voted contrary spent their nights weary in their farms.

Primarily, Ssekikubo faced stiff competition from Joy Kabatsi and new blood Geoffrey Tumusiime. Much as he had faced loads of criticism from different political circles, the majority entrusted Ssekikubo with power because of his neutrality and zeal in governance.

“Initially we had two electorates; Mateete and Lwebitakuli which were later merged into constituencies; Mawogola South and Mawogola West. This gave ample time to Ssekikubo who fostered peaceful relationship with locals in both constituencies,” added Lubowa.

“Several people were bribed on voting day in different polling stations. It was blindingly obvious that Ssekikubo could rise to the seat since he had compromised even his competitors,” an insider who preferred anonymity shared.

But according to locals, those that voted in favour of Ssekikubo remarkably did it simply because the he has been focal in fighting land grabbing in the land poor roads, cattle and milk.

“He (Ssekikubo stood tall to disallow people from grabbing and selling land vulgarly,” Lubowa shared before adding; locals were technical enough to vote for a person whom they refer to in case they’re grappling with land and child labour matters.

Today, most of the farms in Ssembabule are protected by the army since the political wrangles have been enormous. This has left most of the farmers in fear for their land and cattle to be grabbed by goons.

“To achieve you need to be the lighter among the people you are leading. I think contrary to his opponents, this is what Ssekikubo did,” remarked Jude Kasekende, the Ssembabule Town Council Mayor who settled in the area in 1997.

Kasekende says the relationship Ssekikubo had fostered with local leaders including the long serving politician Sam Kuteesa all ignited his victory.

Before joining politics, Ssekikubo had worked at the Ministry of Defense as an assistant secretary in the administrative office much as his major political scene was realized when he stood for deputy speaker before losing to Jacob Oulanyah the current deputy speaker.

“We hope that he will help us in our long journey and quest for market. The locals have intensively produced goods but the market remains their major problem,” added Kasekende who hopes to change the youths mind set through engaging them in farming.

Kasekende says much as they entrusted Ssekikubo with their votes; locals in areas like; Lugusulu and Kyabi are struggling to make ends meet.

“We still face stiff challenges in collecting water in areas like; Kampala, Kyera, Kalukyenkye and Muzi. The farmers are grappling heavily,” added Kasekende.

He says of all the opponents that had stood against Ssekikubo none of them outclass his political analogy and exposure.

Ssekikubo is a graduate with a Bachelor’s Degree of Arts in Social Sciences and holds a Master’s Degree in Public Administration and Management all he attained at Uganda’s oldest University Makerere established in 1922.

“I worked for the locals. The efforts and teamwork we had fostered all were testimonies to my victory,” remarked Ssekikubo in a telephone interview.

The ever conflicted Ssekikubo pondered on eradicating land grabbing and early marriages among the youths as they work on infrastructure developments in the area.

According to Benon Mugarura, the proprietor of Hotel Zebra, as the National Resistance Movement (NRM) party they welcomed Ssekikubo’s victory with thunderous claps. They’ve already rallied around him to ensure that locals get factories; meat and milk to boost the economy in the area.

“Majority of our locals are mainly farmers so I think we need to help them. Their representative in parliament Ssekikubo must act accordingly,” added Mugarura.