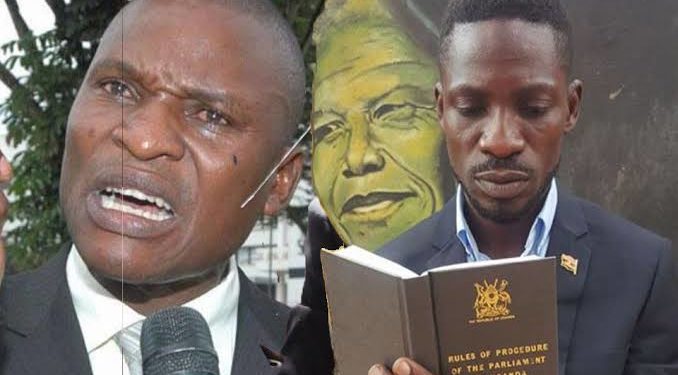 Mirundi Junior has been making headlines since Saturday when the kissing photos made it online. Different netizens have judged his ‘careless’ public conduct which might in return taint his father’s hard-made public image. But that aside, many have been waiting to hear from his father.

Speaking about the incident, the former Senior Presidential Press secretary said he wasn’t surprised seeing his son conducting himself in that manner because he loves being in the show business and such behaviour is always expected.

“Whom did you like him to kiss? did you want him to kiss a goat? has he defiled anybody? My son is in the showbiz and those are the kind of people he associates with. That one went with Bobi Wine and that’s what they do over there, he looks like the people he lives with and I can not be surprised by what he does,” Mirundi said.

Mirundi added that he would be surprised if one of the other educated Murundis behaved in that manner, but Mirundi Junior decided to go with Bobi Wine and living a Casanova lifestyle, kissing each other among other things, are what they do in the life he (Junior) chose.

He however warned that Junior can do whatever he wants for showbiz, but if he hears that his son stole money, defiled a person or engaged in a fight, he will shoot him dead.