Why Museveni has decided to revisit some districts for campaign meetings 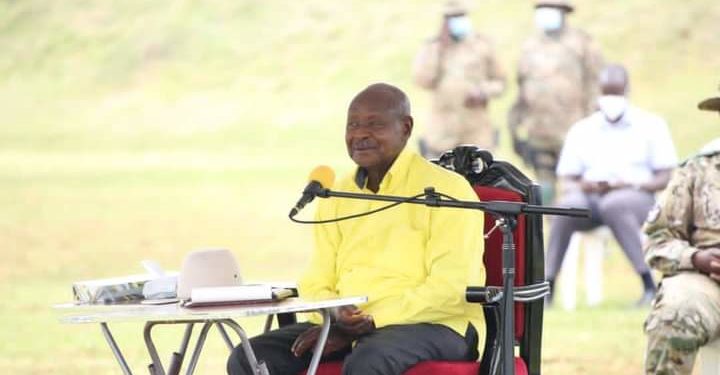 The National Resistance Movement party Secretary General Hon. Justine Kasule Lumumba has said that following the suspension of political activities in 14 districts considered to be registering high spread of the virus, President Yoweri Museveni will revisit some districts where he was recently and also go to those he skipped. This, according to the party arrangements will go hand in hand with his television and radio addresses across the country.

Lumumba was on Sunday addressing the party’s weekly press briefing at NRM Secretariat in Kampala where she said that some districts have been reconsidered to be visited by the president to strengthen his support.

‘’I want to inform the country that after the announcement by the Electoral Commission suspending political activities in the 14 districts in the country, the NRM party took a decision that our presidential candidate will increase on radio and TV programmes. We have also considered our presidential flag bearer to go back to some of the districts, some where he has been to while others he did not make it,’’ Lumumba said.

As per the media programme, she said that the President is scheduled to have an interview with New Vision newspaper and her sister publications under the Vision Group today, and then on Monday he will have a radio and TV programme in Luo for the benefit of Acholi and the Jopadhola at 7am.

Lumumba adds that the NRM presidential candidate will address a press conference for TV and radio that will be in Lusoga and on Monday 11th he will address the people of central region through radio and television in Luganda. The President will later conduct a general address to sum up his campaigns. The address will take place at Nakasero on the 12th January 2021.

According to Lumumba, President Museveni is expected back to Kisoro district to meet the leaders who he did not meet, Maracha, Kasandha and Mityana. ‘’So we are working out plans with the Electoral Commission to see that we don’t collide with any candidate. And the moment EC gives us permission we shall get to inform people in those areas so that we are able to receive him and work with him,’’ Lumumba said.

The President will visit Yumbe district in West Nile on State duty to officiate at the opening of a new fruit factory and the government referral hospital that was constructed recently.

Ms Lumumba called on Ugandans to ensure peace and desist from violence that could result into loss of lives.

‘’I am here to call for peace and calmness during General Elections. Everybody wants peace and should exercise his or her own rights in a peaceful environment,’’ she said, adding; “I also want to call on the NRM fraternity and supporters and well wishers to be firm and confident as we take on the general elections at all levels beginning with presidential and parliamentary elections on the 14th January 2021.’’

Lumumba also thanked all those who have been able to observe all the SOPs, but in a special way, she thanked President Museveni for walking the talk, the minister of Health, the ministry officials, and most importantly the health workers on the frontline.

‘’I want to request Ugandans that as we go for the polls intensify and those doing door to door campaigns, let us be mindful of the health of the people we are going to meet. Let us observe the SOPs as we move to people’s homes , as we hold the small meetings, as we train our agents and also demand as candidates and voters that SOPs are observed at the polling stations,’’ Lumumba emphasized.