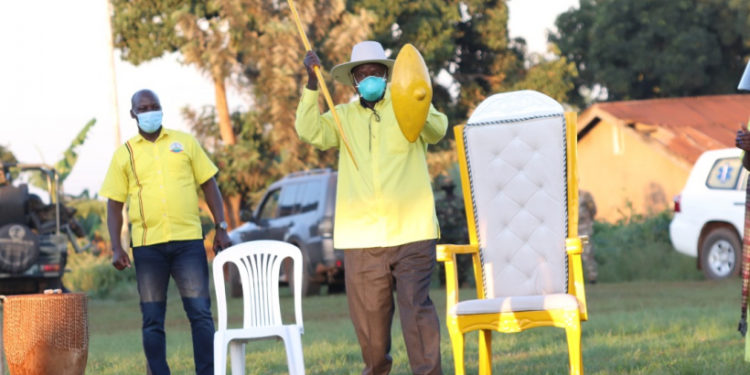 President Yoweri Museveni, the NRM presidential candidate has said Uganda has achieved a lot under the NRM leadership that even the blind can see the development.

Speaking to NRM leaders, flag bearers and youth leaders from the Greater Mpigi districts of Butambala , Gomba and Mpigi at the police playgrounds in Mpigi town council on Tuesday, Museveni said that right from the start, NRM set out to differentiate itself from other parties.

“If you want to know how NRM started and differed from other parties, look at how we emphasized people’s needs, other than their tribes and religion. We do things intentionally and not by mistake, ”he said.

“If you want to know the brick that NRM has put on the development of Uganda, look at our ideology and you will realize we have done a lot to change this country.”

The NRM presidential flag bearer who was speaking in Luganda explained that things like roads that government has constructed in various parts of the country don’t segregate between tribe or religion and gender but are for the benefit of everyone.

“An example is the Ssembabule road that benefits Muslims, Christians and Baganda. When the NRM came to power, we emphasized people’s needs because these bring people together. The fruits of this wise decision are seen in the previous elections where NRM has not scored less than 60%,”Museveni noted.

The President said that this story of success should be told to the people by the NRM leaders whom he asked not to keep quiet about the party’s achievements.

“When I went to Kisozi, people were democratically poor and were asking me to give them money. I refused and asked what would happen to them the following day. If you have a friend and is hungry, don’t give him fish but teach them how to fish and give them a hook,”Museveni said.

The NRM presidential candidate said because of this idea, 1400 homesteads out of the 1700 in Kisozi have now adopted commercial farming after abandoning subsistence production.

“I ask our leaders to take this approach and teach people to start working for both the stomachs and pockets. Our people should do this to ensure they join the money economy.”