by Stephen Kalema
in News
5 0 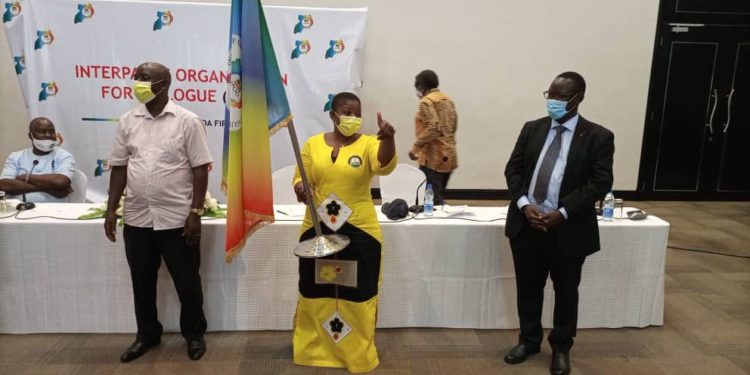 NRM takes over IPOD leadership from JEEMA on Tuesday

Opposition political parties under the Inter-Party Organization for Dialogue (IPOD) have castigated the National Resistance Movement (NRM) for being greedy after failing to provide a neutral political ground for all players.

Political parties which include; the Democratic Party (DP) and Forum for Democratic Change (FDC) disclosed their dissatisfaction on Tuesday during the handover ceremony where NRM took over IPOD leadership from Justice Forum (JEEMA). The ruling party will be at the helm of the dialogue for the next six months.

The aggrieved parties wondered the type of leadership NRM was bringing on the IPOD table yet its chairman-President Yoweri Kaguta Museveni has degraded their candidates who are competing for presidency with him.

Opposition parties also blamed NRM for using state machinery to do its partisan works. They gave examples of police and the army who have made it a routine to deface and pull down campaign posters of opposition candidates, denying opposition airwaves, using RDCs to fight oppositions and also arresting opposition political actors without explanation.

DP President Norbert Mao said there is nothing new NRM is bringing to IPOD  unless being greedy and ruthless to their fellow political actors.

“NRM you are undermining IPOD, how do you expect us in the summit to trust you? You are shameless masqueraders, cupreous and malevolent. Although you are taking over the IPOD leadership today, I am scared of you because I wonder the type of leadership you are bringing on board really?”

Mao also challenged the chairman of NRM Museveni to check on the languages he uses while referring to his competitors in the same race because it’s a sign of primitivity and fear which in turn has led to torture of many opposition political actors by the national security agents.

“I want to call upon the incoming chairman of the IPOD summit Gen Yoweri Kaguta Museveni to reflect on the kind of languages he uses, the use of threatening language like I will crush you. If you fail to persuade somebody to vote for you please don’t threaten them,” he said.

Harold Kaija the FDC Deputy Secretary-General, also said that fear and mayhems have now covered the heart of IPOD member political parties since the masters in inflicting pain on them are now in the driving seat.

“NRM is such a party filled with ruthless and greedy political actors who feel that if the opposition parties are given funds they will help them get stronger and be able to compete. For me I feel sudden when I see that it’s NRM taking over IPOD leadership,” he said.

However, the NRM Secretary General Kasule Lumumba while receiving the leadership mantle from JEEMA promised all the IPOD member parties to stay calm because all their grievances will be looked at and will be solved amicably.

“Whatever you have raised has been noted and we shall continue with the discussion and find solutions together and we shall work, implement them together as IPOD,” she said.

Meanwhile, Mr Frank Rusa, the country representative of the Netherlands Institute for Multiparty Democracy (NIMD) urged the leaders of the political parties to desist from holding mass rallies which may expose voters to the deadly pandemic Covid-19.

Covid-19 is worse than we thought! Singer Bruno K shares how he almost died from the deadly virus

Covid-19 is worse than we thought! Singer Bruno K shares how he almost died from the deadly virus