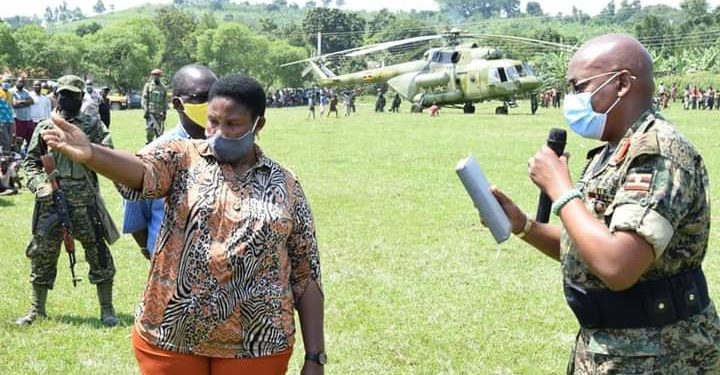 The Chief of Defence Forces of the Uganda Peoples’ Defence Forces, Gen David Muhoozi, has instituted a seven-man committee chaired by the Chief of Staff Land Forces, Maj Gen Leopold Kyanda, to examine and streamline the operations of the Fisheries Protection Unit (FPU) in all the major water bodies of Uganda.

This follows a number of complaints from the community of high handedness during operations by some individual members of the FPU which was formed in 2016 to arrest a situation of fast deteriorating fish stocks in the country due to illegal fishing practices.

“In order to consolidate the achievements of the Fisheries Protection Unit, the strategic leadership formed this committee to implement the structuring of command of the Task Force at all levels, ensure individual Task Force personnel who could have committed some mistakes are held accountable, and establish structures to ensure effective Civil Military Cooperation as well as reporting lines,” said Maj Gen Leopold Kyanda.

He noted that the establishment of the Fisheries Protection Unit had yielded enormous benefits to the fishing communities in particular and the country at large that needed consolidation. He enumerated these benefits as the revamping of fish factories that were closing down due to low fish stocks in the Ugandan water bodies which was caused by poor fishing practices. He said that this achievement offered more employment opportunities to Ugandans.

Also, he said two years after the establishment in 2016, there was increased fish biomass of up to 68 percent and revenue collection.
“In 2017, government collected 400 million shillings of revenue from fish through licensing alone. In 2018 it rose to 800 million shillings while in 2019 the country realized 2.7 Billion shiloings,” said Maj Gen Kyanda.

He added that there were also remarkable reduction of deaths and other crimes in the waters as a result of the FPU deployment on the waters.
“The visibility of FPU personnel in the waters helped to control overloading of boats/ Canoes that used to result in various marine fatal accidents. Their presence together with the UPDF Marine also helped to control cross border aggression on our citizens by armed bandits,” he noted.

Maj Gen Kyanda who had led his committee to Rubirizi thanked the district leaders at all levels for their continued support to the UPDF generally in executing not only its combat operations, but also Operations Other than War, such as Fisheries enforcement, which aimed at restoring the fish stocks in Uganda’s water bodies and further contributing to Uganda’s revenue collection and providing a peaceful fishing environment.