Bobi Wine: Gen. Museveni will eventually understand that this country belongs to Ugandans

by Mubiru Ivan
in News, Politics
88 5 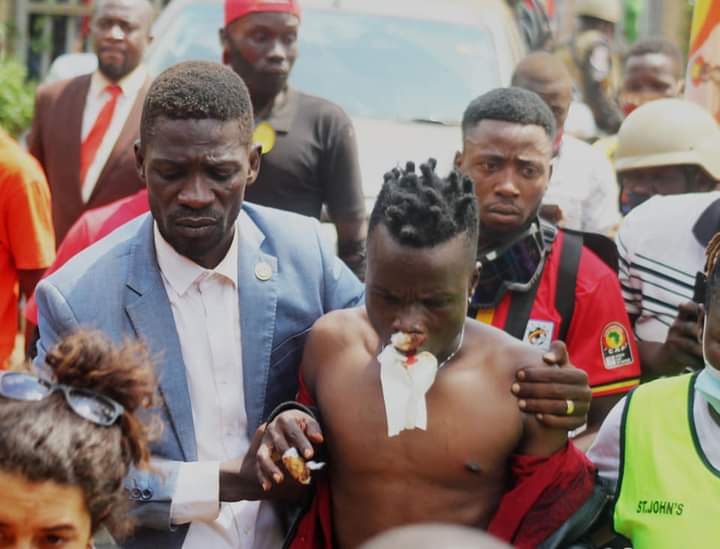 He says the President is doing everything possible to frustrate the struggle for freedom using the military but very soon power will go back to Ugandans.

“The struggle for freedom and democracy is worth every pain. Ultimately, the people of Uganda will triumph! Like I said a few days ago, we start every day not knowing how it will end. We come in peace to preach our message, but the military responds to us with brutality and violence. Yet in all this, we know that our struggle is a just one. Gen. Museveni will eventually understand that this country belongs to Ugandans, “Bobi Wine said in a Facebook post on Tuesday.

The Kyadondo East legislator’s statement follows the brutal response used by security operatives to disperse his supporters in Kayunga on Tuesday.

During the scuffle, Afande Kato, the head of Bobi Wine police security detail was rushed to hospital after being severely injured by the operatives.

Afande Kato was injured along with music producer Sir Dan Magic and supporters of the presidential candidate  as security fired bullets and teargas to disperse them.

“Many members of our campaign team have been seriously injured and are currently nursing wounds at Nazigo HC III in Kayunga after police beat up many of them. Among those injured are producer Sir Dan Magic, who is bleeding from both the nose & ears and Afande Kato, who heads the Security detail that was given to Hon. Kyagulanyi by the EC,” the National Unity Platform (NUP) party posted on their official Facebook page.