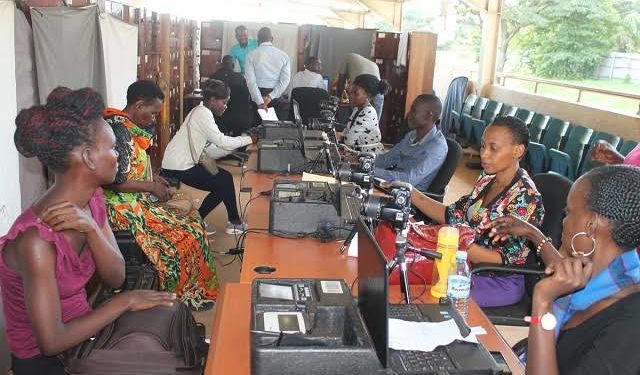 Ugandans at NIRA offices trying to work on their national IDs

In 2010 Uganda made her first attempt to establish a comprehensive national identity system, unfortunately, it failed and in 2014, the government launched a new digital Identity (ID) program under the National Security Information System (NSIS) Project.

The project was in connection with the voter registration process ahead of the 2016 general elections. And in March 2015, as the United Nation (UN) General Assembly was preparing to adopt the Standard Development Goals (SDGs) the government converted the NSIS Project into a permanent national foundational digital ID system.

To ensure the efficiency of the system, government oversight was restructured for both the Civil Registration and Vital Statistics System (CRVS) and the new national identification system was formed by enacting the Registration of Persons Act of 2015.

The Act led to the establishment of the National Identification and Registration Authority (NIRA) under the Ministry of Internal Affairs, reflecting the national security concerns driving the initiative for the digital ID system.

However, according to the research made by Unwanted Witness Uganda, Ugandans are too frustrated with the way NIRA is handling the task which was lawfully given to it yet currently the National Identity Card is almost the main key in attaining any opportunity in Uganda despite the number of qualifications one may have.

Among other things, the National ID is used for are; accessing public service entitlements including, registration and acquisition of SIM card, movement and trade across East African regional borders, healthcare, social protection and opening up bank accounts.

Although National ID in Uganda is now a compulsory item that every Ugandan must have, attaining it is one of the hardest things especially to the common Ugandan unless one has bribed.

Most Ugandans allude that NIRA’s performance is too slow which has left many people suffering. In March 2020, NIRA had received 29.3 million applications for the Identification Register, representing approximately 68 per cent of all Ugandans. Of these applicants, 25 million had received National Identity Numbers (NINs), printed only 18.3 million National Identify Cards (NICs), and 15.2 million individuals had received a NIC. Leaving a gap of 3.1 million NICs printed but not issued causing backlogs.

Over 2.4 million Ugandans aged 16 and above have not enrolled for the National Identity Cards and these figures keep changing as many Ugandans lose their IDs or turn 18 years. Yet the problem of slow performance is not worked on. The delays have plagued digital ID card issuances and replacement services to be disproportionately affecting the poor and vulnerable populations especially those living far from the capital city of Kampala.

Given the fact that the Registration of Persons Act 2015, criminalizes unregistered persons, youth without IDs have found it harder to seek employment. This also traps the citizens in unescapable cycles of poverty, contravening Article 6 of the Universal Declaration on Human Rights, which stipulates that “Everyone has the right to recognition everywhere as a person before the law.”

They rarely seek consent from the owners of the data (citizens) because NIRA and the MDAs sign the Memorandum of Understandings “behind curtains.”

Lawrence Muyomba, a researcher also an investigator from Unwanted Witness in an interview with this website said that Uganda going digital is a perfect step however if the rights of the citizens are not handled well, Ugandans will be living in captivity since their data is at risk of being share by NIRA without their consent.

“Uganda going digital is good, however, if the systems are narrowed with taking into consideration the rightful human right impact assessments, the system is bound to make citizens as Zombies in their country. Disillusioned further by the fact that other identity documents in the country are not given priority,” he said.

Previously, Ugandans would use multiple identification documents to access services, however, today digital identity systems being deployed have replaced the true meaning of ‘legal identity.’ Because other authentic identification documents issued by the government such as passports, voters’ IDs and driving permits are no longer widely recognized to access public service entitlements.

Therefore, people without National IDs are currently regarded as non-Ugandans and they are not able to receive some services. Even if they present their passports or driving permits to the responsible personals, they will again be asked for the National Identity Card.

Without a comprehensive human rights impact assessment regarding exclusion, citizens’ dignity hangs in balance. This is especially when the systems fail to recognize them because they lack a digital ID placing the most vulnerable at a higher risk.

Research conducted recently show the dilemma Ugandans pass through to attain a National ID starting from the registrations. There are a lot of issues people face such as money extortion, inaccuracies by NIRA officials who most of the times blame applicants and in most cases, the applicants have to again pay money. Applicants also incur indirect costs of transport, photocopying, bribery and corruption.

Stella Nanfuuka, 22, a resident of Mutungo tells a story of how she has laboured to get her National ID since 2017 but up to now, she has not been successful.

“I first registered in 2017 from Kitgum district because I was working from there. And when I came back here, they told me to pick it from Kololo, reaching there, they told me it was not in the system.I had to re-register early last year from Ntinda branch, after three months I went back and still it was not there.

“Early this year, I went back to NIRA and it was discovered that I registered two times and all the two IDs were there. But they instead asked me to first do citizenship review by taking my parents IDs, latter from the LC1 chairperson to rectify if am truly a Ugandan, that is now what am doing.Of course, not having a national ID has made me fail to have a bank account, I have lost many job opportunities because of not having a national ID. Since I’m dying to see that I get my ID, I have been vulnerable to conmen for many times, unfortunately, my friends got theirs but me I have not,” Nanfuuka said.

What can be done

According to the policy brief from the Unwanted Witness, NIRA registration sites should provide support to people who cannot read or write, to further curtail on extortion schemes by interpreters (“consultants”) at the registration points.

Where possible, National ID registration forms have to be translated into commonly spoken local languages including sign and braille language for the deaf and blind respectively.

Parliament should amend section 55 of the Registration of Persons Act 2015 to reduce the requirements and information needed for registration. Minimum data should be collected reducing on the many fields of data entry that expose sensitive data to privacy risks. On the principle of necessity data collected is not intended to be more far-reaching than is necessary for the purposes for which the data will be used.

NIRA must provide alternative systems to manage biometric failures within the vulnerable populations like the elderly, manual labourers and PWDs whose fingerprint capture might be problematic.

Parliament must amend section 66 of the Registration of Persons Act 2015, which mandates the access to social services on the availability of the National Identity card. The amendment should provide for the alternative identification documents because the cost is severe for those without Identity cards.

The government should engage in a multi-stakeholder consultation including citizens, authorities and civil society to provide a feedback mechanism to address National ID grievances/ concerns. And finally, NIRA should provide transparency reports about data sharing detailing the number of private and public organizations making data requests and the purpose.