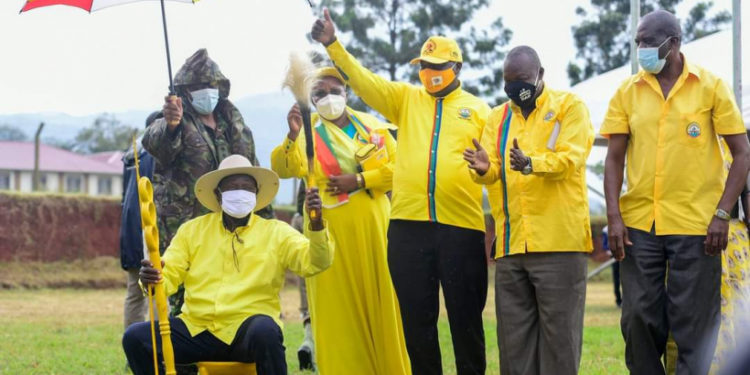 President Yoweri Tibuhaburwa Kaguta Museveni has said that it is because of applying the NRM ideology that Uganda has achieved immense development in the last 34 years.

The NRM presidential candidate was on Tuesday, 24th November,2020 meeting the party leaders from the districts of Namisindwa, Manafwa, Bududa and Mbale at Mbale Secondary School grounds in Mbale City.

“Africa is where all human beings started and the old civilization like that of Egypt started here. The modern religions of Christianity, Islam and Judaism were all saved by Africa. However, in the last 500 years, Africa has had many problems that the continent which was first became the last until it was colonized and many people taken into slavery,” he said.

“Even after independence, Africa didn’t settle down. In Uganda, in the 24 years of independence, we had nine governments with each lasting 2.5 years and would collapse. However, the good thing was that some of us were there and seeing things moving and later corrected them,” he said.

The President explained that past governments fronted sectarianism of tribe and religion and owing to this, they would not last long in power because people were divided along those lines, whereas they could not form a strong national army. He cited an example of the year 1962 where Democratic Party was for Catholics, UPC for Protestants and Kabaka Yekka for Baganda Protestants noting that when Kabaka Yekka and UPC formed an alliance, it lasted only two years.

“The first casualty of this sectarianism line is political stability. If you take the sectarian line, you can’t build a national army. Instead of looking at how good a soldier is, you now look at his tribe or religion. The country went through a series of crises because of sectarianism of tribe.”

President Museveni explained that some of them including Ruhakana Rugunda and Eriya Kategaya who were in UPC and himself in DP were watching the mess as it went on in the various governments and decided to act.

“We then started questioning why people were concentrating so much on tribes and religion. It was the answer to those questions that led to the formation of NRM . When we decided to concentrate on the people’s needs, we had taken the road of the NRM and diverted from the behaviour of the UPC and DP,” Museveni told the NRM leaders.

“That’s how we built a force that took over Uganda because we would recruit from all over the country. For us we were not looking at tribe, religion or gender but how good you are. It is how we built the NRM in the bush as the political wing of the NRA.”

He explained that because of this NRM ideology, they were able to capture power in 1986 whilst ensuring unity, strong army, peace and stability of the country which later led to prosperity that Uganda is enjoying.

Commenting about a crucial decision that the government took during the Constituent Assembly days, Museveni said they agreed to return the departed Asian properties and that this opened doors for foreign investors into the country because of the confidence they had in government in regards to respect of private property.

“The foreigners have helped us create new jobs unlike before when Ugandans were used to government jobs. It is because of this wise decision that Mbale Industrial Park alone will employ over 200,000 people here in Bugisu. We have more than 5,000 factories whereas the tax we collect has increased from Shs 5 billion in 1986 to shs21 trillion,” he said.

Museveni noted that it was because of the wise decisions that government undertook that have seen the development of the country, noting that currently, government can do anything it wants using its own money from taxes.

According to the President, this ideology should be told to all party supporters by the NRM leaders to ensure they make wise decisions in the forthcoming general elections.

Museveni, however, reiterated the message of the population working not only for the stomach, but also for the pockets to ensure they have money to purchase other needs in life.

Tomorrow the President continues with his campaign trail in the Bugisu sub-region in Sironko District.