by Brian Mugenyi
in News, Politics
4 1 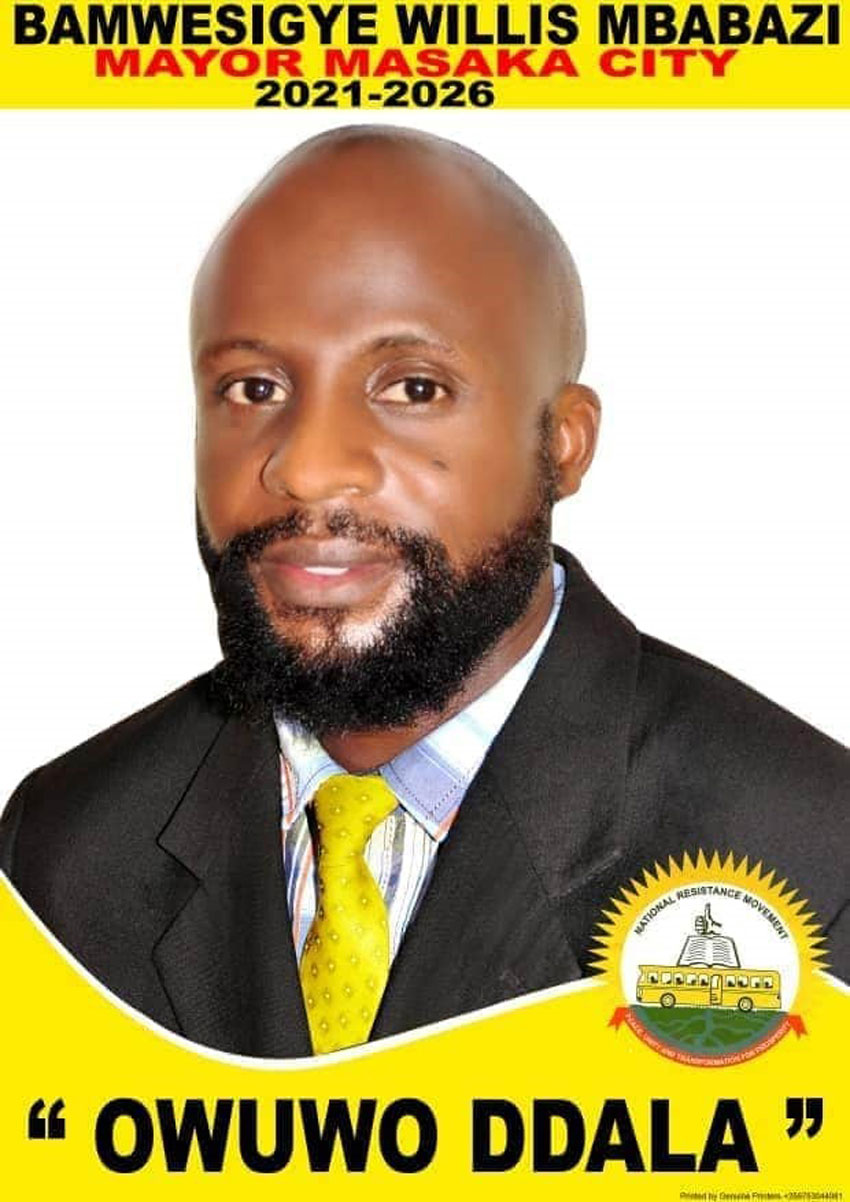 When Willis Mbabazi rained like thunder to stand as Masaka City Mayor, it was a surprise to many because he had not been popular in the politics of the area.

It was until during the recently concluded National Resistance Movement(NRM) primaries that he proved a point that he is indeed a man of steel after trouncing renowned businessman Emmanuel Lwasa to become the ruling party flag bearer for the seat.

Beaming with a lot of confidence, Mbabazi went on to win Lwasa Emmanuel in the National Resistance Movement (NRM) party primaries to take home the ticket.

The story of the rise of Mbabazi in Masaka Town is a bit telling. One can relate it to the story of Joe Biden who has given America’s Donald Trump a huge lesson in 2020 United States of America general elections.

Married to Shiko Pauline whom they have three children, Mbabazi attended Maanyi Memorial Academy and Makerere University Business School where he attained a Bachelor’s Degree in Human Resource Management.

Mbabazi has been known conversely in the business sector. Football in particular as an agent. However, he says he primarily ventured in Jejemia properties Limited and later partnered with Frankfirm estates in Ssembabule District.

A sports man who has worked with Mbarara City Football Club and Alpha Academy in Masaka Town, Mbabazi says it is high time for National Resistance Movement (NRM) to rise up like phoenix and take control of politics in the centre of Masaka City.

“I’ve worked for the sports industry mainly for some good time and I hope to work for people of Masaka with all my heart,” shares Mbabazi also a football agent for Express’s goalie Otim Denis.

Mbabazi has been working conversely to ensure that he develops the deep villages of Mbarara District specially the youths in talents development and erecting house for deprived families.

“We have done it in Mbarara. Why cannot we do it in Masaka District too?” asks Mbabazi beaming with a lot of Confidence at Masaka’s Zebra Hotel.

“I love my party NRM. I have served it and I hope to sacrifice my life to ensure that we regain the lost glory in Masaka. Yes, Democratic Party had showed their confidence before but we hope to sweep them like grass this time around,” adds Mbabazi.

Mbabazi has spent the last five years working with the youths and he hopes to divert the ideas which he initially hatched in Mbarara City to Masaka City youth.

“Majority of Masaka people are youths. What unites the youths are the technical and hands on jobs. We hope to do that straight away. Before, I was very instrumental in refurbishing the Ssaza Playground for the Buddu team and I met Pookino Jude Muleke and we shared plans of developing the City,” says Mbabazi.

Mbabazi hopes to work with different women groups to ensure that they are well empowered materially and financially.

“Mr Museveni is willing to work with us to develop Masaka City. Before, the area lost loads of projects like factories which would have employed most of the youths in the area,” added Mbabazi, 33-years-old.

Mbabazi says he is very connected to the ruling government and he hopes to work closely with president Museveni to develop Masaka City.

“Masaka City today is blossoming with streets lights and good roads especially in the main town. I think if we work closely with the government we will be able to achieve more tangible goods and materials that will develop the City,” says Mbabazi.

The past history has shown that Masaka City is an opposition zone. The ruling National Resistance Movement has not enjoyed good grades in the area. However, Mbabazi faces stiff competition from National Party Platform (NUP) candidate Florence Namayanja and Lwasa Emmanuel (Independent) respectively.