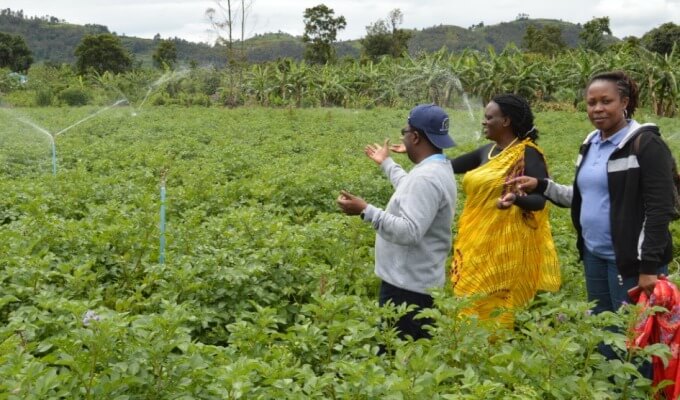 The Rukiga Resident District Commissioner Pulkeria Muhindo Mwine has challenged parents to stop the tendency of land fragmentation noting that it will retard the individual and household productivity.

Ms Muhindo revealed that some parents have been dividing land amongst children even before their parents are still alive, something that has affected commercial farming in the country.

She advised parents to manage their properties like companies, with their children and other dependents acquiring shares so that their wealth does not ‘die’ with them.

Ms Muhindo made remarks on Wednesday while leading a delegation of politicians, technocrats and farmers from Rukiga District during a one day agricultural tour at Ntungamo Integrated Farm and Demonstration Centre (NIFADC) owned by a model farmer Namara James in Kyabahinda Nyarubaare Ruhaama county Ntungamo district.

Muhindo also asked youth to use their parents land instead of running away from villages to towns if they are to avoid being used in political violence.

The Rukiga District vice chairperson Muganiizi Jackson appealed to the general public to always use land as an investment for the family in order to maximize the profits saying that when land is portioned to children they may sell everything.

Muganiizi also advised youth who are looming in urban areas seeking jobs to go back to villages and concentrate on agriculture as a job as the only way to curb the increasing youth unemployment in the country.

Namara James, a model farmer and proprietor of Ntungamo Integrated Farm and Demonstration Centre (NIFADC) reminded the public that societal transformation starts with one person noting that people should stop a tendency of saying that they are waiting for others to start.