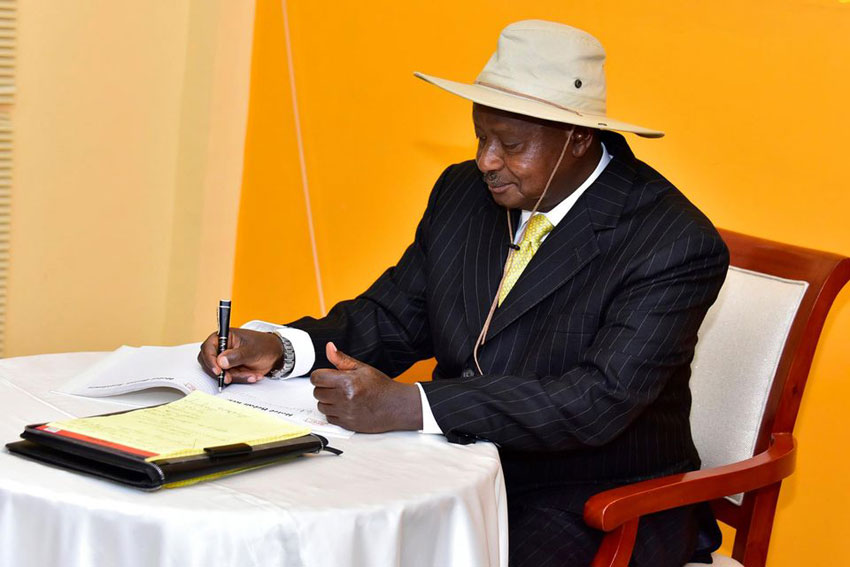 President Yoweri Kaguta Museveni in his capacity as the NRM National Chairman has appealed to voters of Lango Subregion to vote NRM at all levels in the forthcoming general elections for purposes of simplifying service delivery in the area.

The appeal was made during the commissioning ceremony in Lira on Monday 14 for the party coordinators in the subregion under the office of the NRM National Chairman who will form Museveni’s special taskforce for the 2021 reelection bid.

“The National Chairman wishes to thank the people of Lango for supporting him. However, he appeals that you do not support him alone but support him by sending friendly leaders to work with him. Vote NRM candidates alongside him,” reads Museveni’s letter in part.

“Voting other parties makes work difficult yet he has to pay back politically. For best results, the leadership chain should match,” he continued.

The President also asked the people of Lango to embrace the fact that Obote – their most revered political legend fell from power and he will not be coming back, advising further that it’s now time to move forward and foster development by forging unity.

“People here still think that Dr. Obote, their most prominent son ever, will return. You should understand and accept that Government changed. We now have the people’s Government of unity under NRM. It’s a new era of bridge building and fundamental change”.

Museveni emphatically said that even though there were some rivalries between his administration and Dr Obote,those were in the past and his government actually recognises and celebrates the good work of the fallen leader to the nation, a fact that has brought his family onboard through reconciliation.

In terms of development, Museveni noted that NRM has delivered on infrastructure development connecting the sub-region to neigbouring areas and easing transport within and congratulated them for getting Lira City which will work as a conduit for more development in the area.

The event was the first one asMilly Babalanda’s Office of the National Chairman (ONC) team embarks on a three day tour of Northern Uganda and West Nile, training and commissioning the coordinators planted by the Kyambogo office to form Museveni’s election team a head of the 2021 elections.

They are expected to stage a similar event in Gulu today Tuesday 15 before moving to Arua on Wednesday 16 to count the East, North and West Nile regions covered as part of the nationwide exercise.