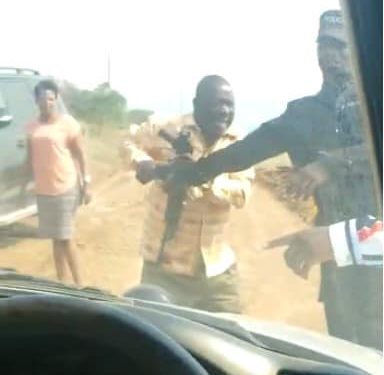 THE UNTOLD STORY: What exactly happened in the Rushenyi County, NRM primaries incident in which Hon. Rukutana was provoked to draw a gun in self-defence, against masked attackers?

On Tuesday, 7th September 2020, Ntungamo Grade One Magistrate, Nazifa Namayanja remanded Rushenyi County MP and the State Minister for Labour, Mr Mwesigwa Rukutana until 15th of September 2020 when he will reappear for a ruling on his bail application.

The allegations made against Rukutana among others, include: attempted murder, assault and occasioning of bodily harm, malicious damage of property, threatening violence and threatening to kill.

Since Rukutana, was arrested on Saturday 5th of September 2020 and detained at Mbarara Police Station and subsequently charged and remanded in court, the media has been full of several inaccuracies and often one-sided mistruths about the circumstances leading to the unfortunate incident and the incident itself. This has subsequently painted a wrong picture of Honourable Rukutana and in the circumstances, leading the court of public opinion to pass a hash ‘sentence’ based on calculated lies and half-truths.

It is important to say that the violent incident of the morning of 5th September 2020, is set against the background of electoral malpractices that the Rukutana camp says was visited upon them, robbing them of victory.  There have been counter-accusations by both the Rukutana camp and that of his opponent, Naome Kabasharira both accusing each other of electoral malpractices but without evidence. However, what remains a fact is that on 4th September 2020, voting did not happen at most the polling stations in Rubaare sub-country, which is considered Rukutana’s stronghold, because, apparently, the Registrar for the area, disappeared with the voters’ register. As a result, voting for this sub-county was postponed to the next day- Saturday, 5th September 2020.  It is our belief that this flawed electoral process that has since been challenged by the Hon. Rukutana camp is the basis for the unfortunate events on the morning of 5th September 2020.

Attacks and provocations on Hon. Rukutana’s family and the resulting unfortunate incident on 5th September 2020

On the morning of 5th September 2020, Hon Rukutana was at his home preparing for prayers after the loss of his mother-in-law. He sent two of his sons with a motor vehicle- a silver-grey Toyota Fielder (UBH 239F), to pick Rev Canon Peter Rubambura, the retired Archdeacon of Ruhama Archdeaconry in South Ankole Diocese to conduct prayers at his residence and thereafter go for the burial of his mother-in-law.  After the burial, he was to proceed to participate in the Rubaare Sub-county NRM primaries that had been rescheduled.

According to Reverend Canon Rubambura and Ronald Twongyeirwe, one of Hon. Rukutana’s son, who was the driver of the car sent to pick the man of God, upon reaching Kagugu Trading Centre, their car was suddenly cut-off by another vehicle, a greyish Toyota RAV-4, which blocked the road. The assailants in the Toyota RAV-4 who according to Canon Rubambura and Twongyeirwe had their faces covered by hooded jackets and or caps, refused to identify themselves. They also accused Canon Rubambura of distributing money to voters. When the Canon asked them to present any evidence of the above allegations, the assailants now threatened to burn the car in which the Canon was travelling.

By this time, residents of Kagugu Trading Centre were beginning to gather around the car and had picked an interest in the activities of the assailants who had started abusing and humiliating the elderly Canon. Information corroborated on video by at least 4 residents of KAgugu Village- Mrs Lydia Tindyebwa Korubiri (68 years), Mr Baryomunsi Wilson, Mr Twiine Erika and Wilson Kakondere shows that the Canon, irritated by the assailants, decided to flee for his life into a nearby banana plantation. Following threats from the now enraged residents, the attackers then drove off towards Rugongi, in the direction of Hon. Rukutana’s home.

According to the Canon, once he had fled the scene, he called Hon. Rukutana on phone to let him know that he had abandoned the trip but his sons who had been sent to pick him, were still in danger since the assailants had fled in the direction of his home.

With the assailants gone, Hon Rukutana’s son, and his other brother who was in the car, drove towards home, but without the Canon. However, their journey would again be cut short by the same occupants of the RAV-4 who were waiting for them a few kilometres away and had blocked the road. By this time the RAV-4 was joined by a second car, a Premio to sandwich the car occupied by Hon. Rukutana’s son. The second attack happened a just about a kilometer from Hon. Rukutana’s home. Enraged and desperate, the 20-year-old desperately called his father to come in and help, especially after the unidentified assailants in the RAV-4 had twice threatened to shoot him and burn his car.

“Even if you call your father, there is nothing he can do now,” the assailants told the young man.

According to eye-witnesses, Hon. Rukutana arrived at the scene within 5-10 minutes and headed straight to the RAV-4 demanding to know who the occupants were and why they were trailing and had now intercepted his children. Upon seeing Hon. Rukutana and his bodyguards, the attackers, in the RAV-4, who remained hooded and others had their faces covered with low-worn caps, locked themselves in their cars and refused to move their cars. Hon. Rukutana then angrily walked to the RAV-4 and demanded that they open and identify themselves. At this point, according to eyewitnesses and Hon. Rukutana himself, one of the assailants was seen ducking and reaching under his seat. This same information is corroborated by the short, edited video that was circulated by the attackers turned victims.

Photos would appear later showing that the earlier-mentioned RAV-4 had been damaged by unknown people, leaving some of its occupants wounded.

No single bullet shot and certainly no person shot dead

Contrary to what was reported earlier, there was no single bullet shot by the minister or his bodyguards. The weapons of the minister’s guards and his private weapon were all retrieved by the police and are being subjected to a ballistics test.

The Rwizi Regional Police Spokesperson, Samson Kasasira is on record affirming that there were no bullets shot and the wounded attackers who were travelling in the notorious RAV-4 are likely to have sustained injuries during an ensuing scuffle.

As seen from the above and as corroborated by several eye-witnesses, it was Hon. Rukutana and his family who were the victims of aggression by the assailants travelling in the Toyota RAV-4 and Toyota Premio cars. It is the assailants who threatened to shoot Rev. Canon Rubambura and Hon. Rukutana’s sons as well as threatened to burn their car. The Hon Rukutana retaliated in self-defence after his children had been attacked not once but twice with impunity and there are all the eyewitnesses, the residents of Kagugu to testify to this.