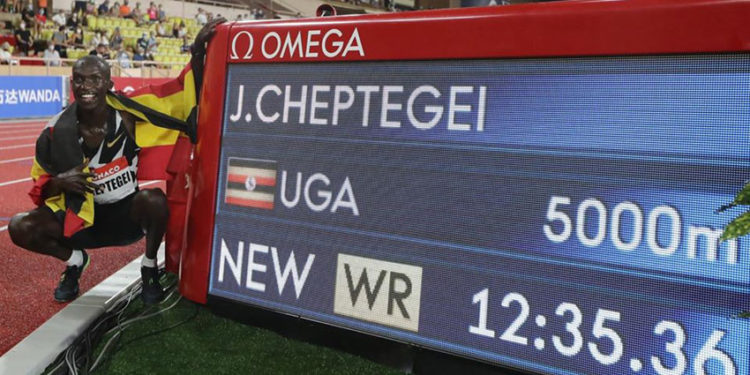 Ugandan athlete, Joshua Cheptegei, on Friday night set a new world world record, once again proving the old saying that failure is an orphan while success has made relatives.

Joshua Cheptegei has made Uganda proud with this feat. He has lifted up the spirits of the country. This is however the same man two years ago who became the laughing stock in town after staggering before he crossed the finish line in Kololo, Kampala.

The 5000 metres champion got thousands of congratulations on his Victory, including one from the President of Uganda, Gen Yoweri Museveni.

“Congratulations to Joshua Cheptegei who has set a new 5,000m world record at the Monaco Diamond League. You have brought honour, pride and joy to your country. Well done!” Museveni wrote on his social media pages.

Cheptegei was born on 12 September 1996 in Kapsewui, Kapchorwa District, Uganda.

In primary school, Cheptegei first played football and tried out the long jump and triple jump, but switched to running when he discovered his talent in distance running.

Remarkably, Cheptegei started to run seriously during his late high school years, around 2013. His natural flair for the sport was quickly evident through his rapid rise through the ranks and onto the global running stage.

He cemented his rights as a professional athlete in 2014, placing second to half-marathon and cross country legend Geoffrey Kamworor in the 10,000m event at the Bangalore World Championships.

He reflects, “This performance was a stepping stone for the rest of my career and changed my life for the better. It made me more determined and gave me the courage to continue working hard to achieve greater performances. I felt that day I discovered a lot of my potential.it unlocked the door to helping me achieve my future goals in the sport.”

In 2015 he moved to Kaptagat (Kenya) to train under Patrick Sang, along with greats like Eliud Kipchoge and Geoffrey Kamworor. Currently, Cheptegei trains in his native Uganda in the district of Kapchorwa. Despite the lure of the ‘Kenyan Advantage’ Cheptegei decided “to do his training from home to inspire the young [Ugandan] ones.”

Cheptegei experienced a major physical and mental setback at the World Cross Country Championships (March 2017), held in Kampala. He led the pack for the entire race until the last 800m, where his body completely succumbed to the heat and humidity. Ultimately, he finished in 30th place. As the subject of numerous sympathetic and humiliating remarks, he retreated to his home for several weeks. This was a pivotal moment in which he developed the resilience necessary for an elite athlete.

He says, “You need to recover what you discover. You need a discovery, then you recover.”

Unsurprisingly, it all paid off months later at the 2017 London Athletics World Championships. Cheptegei proved himself to be a serious threat to favourite Mo Farah, challenging Farah with a dangerous sprint to the finish line and marginally missing out on the gold medal. This was the event that declared to the world that Cheptegei was going to be one of the most talented distance runners on the planet. He became a silver medalist in the 10,000 metres.

Cheptegei is the four-time winner of the Zevenheuvelenloop 15 km road race in Nijmegen, Netherlands.

Cheptegei is most notable as the winner of the senior men’s race at the 2019 IAAF World Cross Country Championships in Aarhus, Denmark. He won in 31:40 on the 10.24 km course.

In 2019, Cheptegei won the men’s 10,000 metres world title in Doha on Sunday with the second fastest ever time in the championships history of  26min 48.36 sec.

He became the fourth Ugandan to win World Athletics Championship gold, joining steeple-chaser Dorcus Inzikuru in Helsinki 2005, Stephen Kiprotich off track in the marathon in Moscow 2013 and Halimah Nakaayi in the 800m at Doha 2019.

He is also a Police Officer at the rank of Inspector of Police.