by Mubiru Ivan
in National, News
29 0 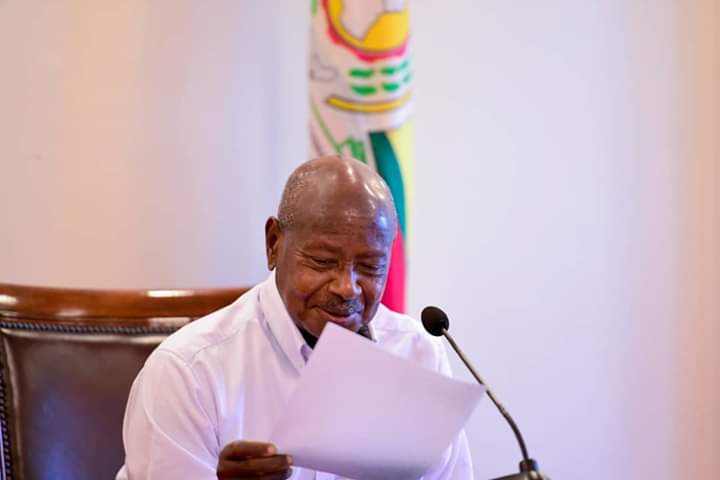 President Yoweri Kaguta Museveni has cautioned the Parliamentary committee on Finance, Planning and Economic Development to first weigh and analyze the advantages and disadvantages of the NSSF Amendment Bill 2019 to the Fund, Government and the members (savers) before they make a decision.

The President this week met the Finance Committee of Parliament led by the Chairperson Henry Ariganyira Musasizi who is also the MP for Rubanda County East who had called on him at State House Entebbe, to seek his views and opinion on the NSSF Amendment Bill 2019.

However, the major concerns of the committee that have attracted debate hence seeking the President’s opinion is the home of the Fund, (which ministry to supervise the Fund, whether it should be the Ministry of Finance or that of Gender) and the 20% NSSF Mid-term partial payment to members.

President Yoweri Museveni told the committee members that when one is managing economics they should always avoid cheap popularity to please people. He reminded them that the NSSF Fund whose current value is 13 trillion has grown to that level because of the wise government’s decisions and therefore advised them to first analyze the benefits and losses to the Fund, Government and members before interfering with it.

“You should first apply calculations (Ekibalo), weigh and analyze what will happen to the fund if members withdraw. It may not be wrong to withdraw but you need to study it,” the President Museveni advised.

The President said that partial payment may not be wrong especially in situations like the current Covid-19 pandemic, but advised that they should look at most importantly the sustainability of the fund so that no one loses in the process.

“If you withdraw the money early, the fund won’t grow, the more the business, the more the savings and interests. So please look into that,” President Museveni appealed to the committee members.

According to NSSF, there are a number of implications of this proposal to the fund, it’s members and to Uganda’s economy at large that will distress the sustainability of NSSF as a retirement scheme.

The immediate impact according to NSSF will be an increased need for liquidity, the fund would have to sell its treasury bonds to meet the benefits, payment and the ongoing real estate projects would be halted among others.

On the home for the Fund, President Museveni told the committee members that money has got its sector, which is the Finance Ministry. He said that the Ministry of Gender does not have the expertise to handle money issues.

“This is a specialized area, the Ministry of Gender is about gender issues, culture, labor laws, safety etc., but money has its sector which is Finance,” he said.

Banking, the President added is a job of the Ministry of Finance, adding that whether public or private, banking is supposed to be supervised by Finance for better or for worse.

The Chairperson, Finance committee of parliament Musasizi said that the bill was drafted by the Ministry of Gender, Labor and social development and so they noticed that there will be a conflict of interest between Ministers of Gender and Finance.

“Mr. President, you guided through a letter to Speaker of Parliament that the Fund should be supervised under Ministry of Finance. That’s why we are here, we want to get your opinion so that we move together,” Hon. Musasizi said.

The Minister of Finance, Planning and Economic Development Matia Kasaija attended the meeting.

How Madhvani's eldest grandson Nitin is threatening lives of his mother, sister to take over multi-billion estate