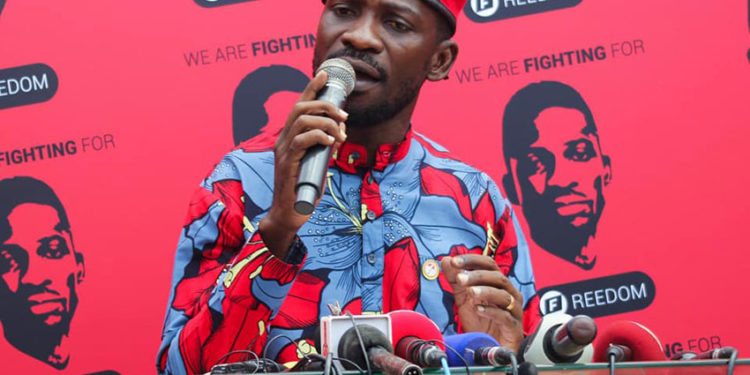 Kyadondo East MP Robert Kyagulanyi Sentamu alias Bobi Wine has poured scorn on those behind the alleged plot to frustrate his National Unity Platform participation in next year’s general elections.

The mood at Kamwokya is currently a sombre one after a complaint challenging the legality of among other things ; changing the Original name of National Unity, Reconciliation and Development Party (NURP) to National Unity Platform, the decision to endorse Bobi Wine as Presidential flag bearer and the manner in which Mr Kyagulanyi attained the party presidency.

Some of the founding members of the NURP party, through their Lawyer – a one James Byamukama have therefore petitioned the Electoral Commission to reinstate the party to it’s original form and block Mr Wine from using or acting on it’s behalf citing fraud in the way he attained it.

Upon learning of the unpleasant development, Bobi Wine directed his fury at the Ugandan authorities for being behind the plot, further arguing that they are acting out of panic.

He goes on to enumerate the blocks he and his allies at the Kamwokya based outfit passed through to get registered.

The seemingly agitated Presidential hopeful also reminisced his blocked consultations for his presidential bid despite the fact that he had been cleared by the Electoral Commission.

According to him, the surprise announcement that saw him own a party having caught the regime’s tight intelligence off guard threw the country into panic, leading to the sacking of a number of EC staff including it’s Secretary Sam Rwakoojo and Spokesperson Jotham Taremwa.

“A few days back, we dropped a bomb shell that threw them into a state of panic. We had been doing all processes legally but quietly for some months. The day we filed papers at the Electoral Commission informing them of the new leadership of the National Unity Platform, President Museveni immediately sacked key people at the Electoral Commission, including Mr. Sam Rwakoojo, the Secretary and Mr. Jothan Taremwa, the spokesman. Their crime? How did all this happen under their watch?” He wondered.

He further alleges that it’s the big swarm of people flocking the party’s offices around the country that could have scared the authorities into trying to silence the party.

“From the day we unveiled the Party, the regime has been thrown into a pandemonium seeing millions of Ugandans who have embraced the idea. They first tried to downplay us, but that did not work. The thousands of people, including leaders who have been flocking our offices to register have scared the hell out of them.” He alleged.

Bobi Wine also says that it’s been after the war on party colors looking like an already lost one that the new plot has been sought as part of the wider plan to frustrate his movement, adding that these are plots by government to shield itself from a looming collapse.

“And now, there is a new attempt by one James Byamukama, whose mission can be clearly understood! The regime is trying to clutch onto anything that will save it from the inevitable collapse and embarrassment that awaits it.” He further alleges.

Although the change of name for the party was done in full compliance with the law, Kyagulanyi feels the complaints are being premised on the fact that he is now the President of the party in question.

He says they have also unearthed some information that there are some secret files being doctored by the government in power to frame his party into rendering it legally unfit to participate in next year’s elections.

“We have information that they are even doctoring some documents on the file! Meetings are sitting every day, to find any avenue through which they can stop us or cut down our momentum.”

He however says the move doesn’t find him unprepared since he and his group have been expecting not only this but also a lot more, adding that this is a characteristic for all failing dictatorships.

Kyagulanyi who seemed not ready to mince his words sounded a lot optimistic by encouraging those that believe in him to keep soldiering on since change of leadership is not far, adding that he is confident the scheme framed for his party is bound to fail by all ways.

“My assurance to you comrades- no machinations of any kind have ever saved these dictators. The winds of change can never be stopped by petty laws enacted by petty despots, or even petty schemes instigated by scared dictators. We THE PEOPLE, shall emerge victorious. This new attempt will fail, like all other attempts before them.” He concluded.