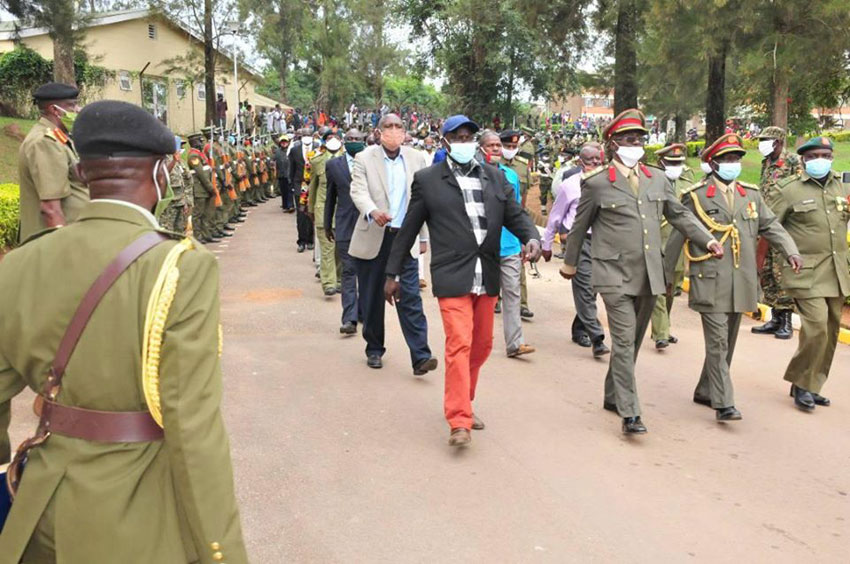 At least 1036 Officers and Militants of the Uganda Peoples’ Defence Forces (UPDF) on Thursday honorably retired from active service in the Forces after most had completed 20 to 40 years of service to the nation and the region.

Due to the COVID-19 situation in the country, the retirement ceremonies were conducted in eleven centers across the country to ensure social distance.

All the Division Commanders presided over the function or were represented by senior Officials in their areas of responsibilities in Masindi, Kakiri, Mbarara, Mbale, Gulu, Pader and Kabarole respectively.

The biggest number; 362 Officers and Militants were retired from Land Forces Head Quarters in Bombo where the Commander Land Forces (CLF), Lt Gen Peter Elwelu was the chief guest.

The CLF urged the retirees to consider being there for their families as one of the core issues to do on retirement.
“You have been very busy and did not have time for your families,now you finally have the time,” he said adding that the retirees need to stay in their villages and concentrate on agriculture which is the backbone of Uganda’s economy and not run to the cities.
“Now that you are going home, I encourage you to go to the garden. When God created us, he put us in the garden, not in the cities,” he said.

He also urged them to continue promoting peace and security while in their communities and shun all those that are deemed to create instability in the country.
“We have to make sure this country remains peaceful for this is the only Country we have, that God gave us,” said Lt Gen Elwelu.

Finally, he urged them to be ambassadors of government in spreading the messages aimed at protecting the people of Uganda against COVID-19. He shunned those who say there is no Corona virus and showed concern at the level of defiance by Ugandans in following the Ministry of Health guidelines against COVID-19.
“COVID-19 is not a dream, it is real. Go and be ambassadors for humanity in your communities,sensitize against COVID-19 as per the Ministry of Health guidelines. The problem with we Ugandans is being very stubborn. We are only lucky that God is with us otherwise we would have paid heavily.” He said, adding that Ugandans need to stay indoors as guided and that it is God’s will that the world is under lockdown.

“Tell your people that it is not government putting us under lockdown but God’s will. As per places of worship, they belong to God, if God so wants us to open them, he will create the condition to open them, stop blaming the President,” he said.

The senior most retiree Col Stephen Kato thanked the UPDF leadership for providing the retirement schedule three to four years in advance that enables the retirees to appropriately prepare for their next life. He said the retirees have got many experiences, learnt skills while in the force that will be beneficial in their future engagements.

Concurrently at the other retirement Centers around the country,various messages and advice were passed on to the retirees.u

In Kakiri, Maj Gen Sam Kawaga told the retirees to walk with their heads high for having served in and been part of a great force, the UPDF. “This force has contributed to peace and security in Uganda and beyond and it is just wonderful that you have been part of that journey.” He said. He added that their retirement is the normal journey of every soldier; recruitment, service and finally retirement.

In Kabarole, Brig Gen Moses Kwikiriza told the retirees that retirement does not mean being tired. “Stay safe and remain focused, work hard to improve on your livelihood using your packages,” he said. Brig Kwikiriza further advised retirees not to live a reckless life that would expose them to dangers such as HIV. “The country wants you healthy, alive and as law a bidding citizens engaging in productive activities,” he said.

In Mbale, Brig Gen Joseph Balikuddembe thanked the retirees for selfless service rendered to the country and advised them not to be lured into subversive activities. “You have done a great job especially in fighting the Lord’s Resistance Army and insurgencies in Eastern Uganda. It is for these efforts rendered that the country is now stable. You are leaving us better than you started, thank you comrades and may you go in peace,” said Brig Gen Balikuddembe.

In Masindi,on behalf of Maj Gen Sam Okiding, the 101 Artillery Brigade Commander, Brig Gen. Dan Kakono, told the retirees to maintain their military discipline as a means to prosper in civilian life. He urged them to continue embracing patriotism, nationalism and Pan-Africanism. He told them to further promote democracy and socio-economic transformation in their communities.

In Pader, Brig Gen Michael Kabango told the retiring officers and militants to desist from indiscipline acts that might block their chances of being recalled for other special assignments by the army and asked them to keep fit through a healthy living. “The struggle in your lives is not yet over. You must be productive at all times and be good leaders as you interface with the community,” he said.

In Nakasongola, Brig Gen David Isimbwa (DAAC-LF) who represented the Nakasongola cantonment congratulated the Officers and men for their contribution in the liberation struggle of Uganda,and the region subsequently.