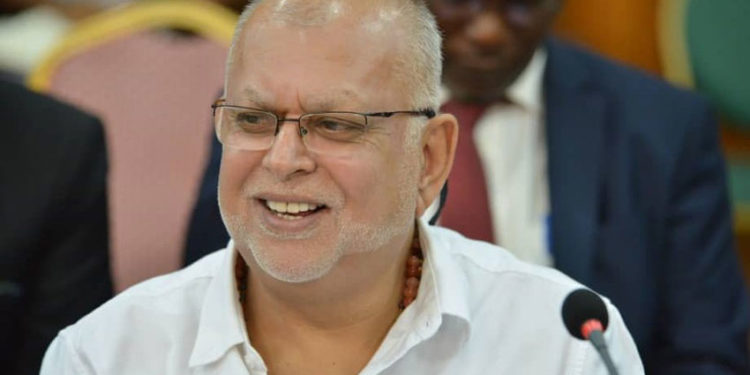 Bank of Uganda on 30 June, 2020 issued a press release saying that it was going to appeal the Court of Appeal ruling, which upheld an earlier High decision to dismiss a case that had been filed against the property mogul by Crane Bank in receivership. The Central bank said it was intending to take the matters to the Supreme Court.

In the statement, Bank of Uganda Governor Emmanuel Tumusiime Mutebile insisted that receivership does not take away the corporate personality of a company which includes the right to trace and recover assets and the right to sue for those assets. The Central Bank also said neither the High Court nor the Court of Appeal has yet considered or taken a decision on the claims for wrongful and illegal extraction of funds from Crane Bank as claimed in the main suit.

“The implications of these judgments are that a Receiver of a financial institution/bank cannot pursue or seek recovery of assets of a bank in receivership by way of legal proceedings,” Mutebile said.

Mutebile further warned that such court rulings could set a dangerous precedent. “The implications of these judgments are that a Receiver of a financial institution/bank cannot pursue or seek recovery of assets of a bank in receivership by way of legal proceedings. This renders the principle of tracing and preserving assets of an insolvent bank during statutory management and receivership futile,” Mutebile said.

Adding,“The judgements also set a precedent that limits the Central Bank’s capacity to resolve banks in a manner that ensures accountability for mismanagement of depositor funds and promotes good corporate governance in the banking industry.”

The lawyers disclosed that their never siphoned any penny from Crane Bank as the Central Bank alleged.

“There is no forensic Report of any kind that states that US$ 92 million was extracted from Crane Bank by Dr. Ruparelia as Bank of Uganda alleges in the press statement. Crane bank was subjected to numerous annual, quarterly and special audits and all its financial statements were approved every year by the Bank of Uganda without reservation of any kind. Not one of them alleged any extraction by Dr. Ruparelia. This allegation is absurd.”

Full Statement of the Kampala Associated Advocates Below:

We act for and on behalf of Dr Sudhir Ruparelia and Meera Investments Limited. Our attention has been drawn to a press release issued by Bank of Uganda on 30th June 2020. The press release was issued on behalf of Crane Bank Limited by the Governor of the Bank of Uganda and published in the print and social media in Uganda. It contained many inaccurate and false statements. Our instructions are to correct the public record.

Why the Case was dismissed by the Court:

1. High Court Civil Suit 493 of 2017 (the suit forming the subject of the appeal) was filed by the Bank of Uganda in the names of Crane Bank Limited in Receivership. The High Court considered the case and determined that it was not legally tenable as there was no cause of action. The case was accordingly dismissed. There is no court in any part of the world that can proceed to hear a case where no cause of action is disclosed.

2. In both the High Court and the Court of Appeal, the Bank of Uganda addressed the Courts urging them to ignore the fact that it had no cause of action and proceed to hear the case anyway. Bank of Uganda was inviting the courts to ignore the law. Both Courts rejected this legally untenable plea that is now being made in the press.

3. The Court of Appeal in its written judgment stated at page 16 that:
“The Appellant {Bank of Uganda} raises an issue that the court ought to have overlooked the preliminary objections and instead looked at the matter on its merits… we respectfully disagree with the Appellant that if a pleading does not disclose a cause of action or locus standi, the courts should still inquire into the merits of the main case. That would be an action in futility. The courts are not meant to award moot judgments. If a person has no cause of action, then the merits of the case cannot be inquired into lest the court may end up condemning a party who should not have been condemned.”

4. The Bank of Uganda should not be allowed to disrespect the Courts, when it is the one that went to the courts to seek redress in the first place. If they are unhappy with the decisions of the Court, the legal remedy is to file an appeal and not to criticize the court in the press.
The false claim that tax payers’ money was injected into Crane Bank and Bank of Uganda’s failure to account for it:

5. Bank of Uganda makes a false allegation that tax payers’ money was used to settle Crane Bank Depositors. This statement is used several times in the press statement but it is not part of the case Bank of Uganda filed. It is an allegation designed to sway public opinion, and has nothing to do with the case.

6. Independent inquiries conducted by both the Auditor General and the Parliament of Uganda (COSASE Committee) have all reported that there was no evidence to support Bank of Uganda’s claims that tax payers’ money was allegedly spent on paying depositors. Money went missing from Bank of Uganda and remains unaccounted for.

9. Bank of Uganda’s auditors stated that the money Crane Bank Limited needed to survive was only 130 bn shillings. Bank of Uganda alleges (without evidence or any rationale) that it injected 497 billion into Crane Bank and has failed to account for it as shown by both the COSASE and Auditor General’s Reports.

The false claim that money was extracted from Crane Bank:

10. There is no forensic Report of any kind that states that US$ 92 million was extracted from Crane Bank by Dr. Ruparelia as Bank of Uganda alleges in the press statement.

11. Crane bank was subjected to numerous annual, quarterly and special audits and all its financial statements were approved every year by the Bank of Uganda without reservation of any kind. Not one of them alleged any extraction by Dr. Ruparelia. This allegation is absurd.

The unreliability of Bank of Uganda’s so-called forensic investigation:

13. The official reason given by Bank of Uganda to the public for the takeover of management of Crane Bank Limited was under capitalization due to provisioning for non-performing loans, not the so-called extraction that is alleged in the press statement, which is an attempt to soil Dr. Ruparelia’s image.

The false allegation that Dr. Ruparelia owned 100% of Crane Bank:

14. The allegation that Dr. Ruparelia owned 100% of Crane Bank is false. All the shareholders of Crane Bank were vetted and approved by the Bank of Uganda in accordance with the Financial Institutions Act.

The allegations made about a settlement agreement:

15. The case Bank of Uganda filed in the High Court and the Appeal in the Court of Appeal did not include any claims of any kind or any allegations of any kind in relation to a settlement agreement with Dr. Ruparelia. Because Dr. Ruparelia has filed a counter claim, whose subject matter is based on that settlement agreement, the Sub Judice rule precludes him from elaborating more on that matter here.

Constitutional Bar to the claims made against Meera Investments Limited:

Bank of Uganda’s complaint in the press that the Courts are limiting its powers to supervise closed banks:

Response to Bank of Uganda Statement