by Mubiru Ivan
in National, News
39 2 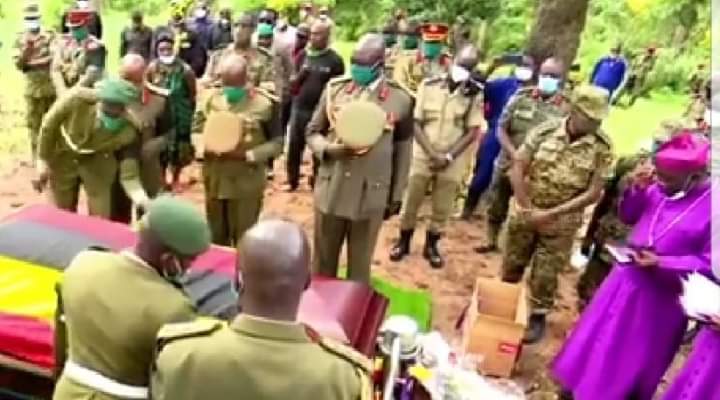 Maj Gen (Rtd) Kasirye Gwanga has on Friday been laid to rest at Nkene Village, Busujju County in Mityana District.

The ex-serviceman died on Tuesday June 9, at Nakasero Hospital after illness.

The burial ceremony has been attended by a handful of mourners as a way of observing preventive guidelines in controlling the spread of COVID-19 pandemic. It was attended by a few high ranking UPDF officers, ministers, MPs and family members.

The area residents decided to follow the ceremony proceedings from afar after they were denied access by security team.

There was a 13-gun salute for the late Maj. Gen Gwanga as he was being laid to rest.

The Chief mourner, Gen Edward Katumba Wamala hailed Gwanga as an embodiment of a true soldier.

“Kasirye has worked as a military officer and has not let the officer code down. He has made a good account of himself. He loved the army and was in his blood. He didn’t just join the army, he lived and loved it. He has been a real soldier in all aspects including his talk, walk and entire behavior.”Gen Katumba who is the minister of works also former UPDF Chief of Defence Forces.

” He has touched many lives, educated many children and an inspiration to many people. He has lived with integrity and committed to service and not driven by material things.”