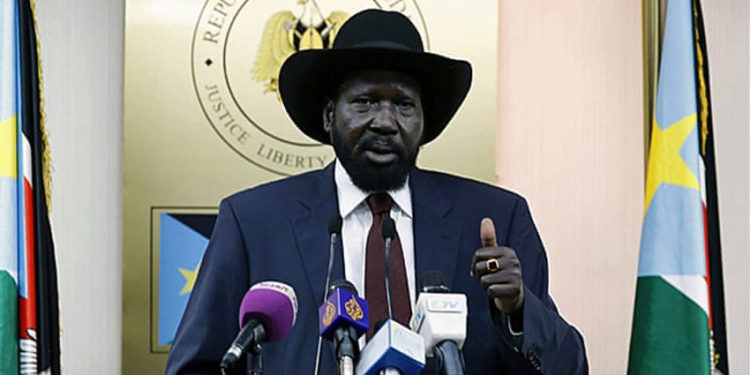 South Sudan’s President Salva Kiir Mayardit made his first public appearance on Monday 25 since the rumour about his worrying health started making rounds.

President Salva Kiir on Monday held a press briefing to speak about the negative speculation about his health after failing to appear in public for days, including his regular Television appearances where he has of late been updating the country on the progress in the war against Coronavirus.

The development would bring an end to the news that have since broken internet and other media channels that the revolutionary leader had ceded power to his Vice President on account of poor health.

“I want to urge all of you to refocus your energies to the fight against coronavirus pandemic and leave futile politicking and helpless propaganda for now,” Kiir told the public.

“The disease we are fighting does not differentiate whether this is a Muslim or Christian, Dinka or Acholi, SPLM or SPLM-IO and therefore this is the unforgiving monster in the room,” the president added.

Kiir also denied reports that he had delegated Vice President Hussein Abdelbagi to act as the president until further notice, urging the public to desist from the negative speculation on the same.

“There has never been any reassignment of duties of the President. The Public should not delve into propaganda,” Kiir said.

The president urged the public to remain cautious and observe health guidelines set out by the Ministry of Health in order to control the spread of the novel coronavirus.

“We now have over 600 active cases of COVID-19 and if we are not careful enough, then such numbers will shoot up and we will be in very deplorable state as country to contain it,” he said.

He added ,”I am once again urging all the citizens specially those residing in densely populated areas like cities and towns to keenly observe the rules of social distancing, wearing of face masks and regular hand washing.”

I’m dragging that empty tin to court! Diamond Platnumz’ ex-lover Tanasha Donna vows to take action against man claiming to be the father of her child