Is Minister Aceng, Museveni losing the coronavirus war as Uganda’s cases jump to 203? 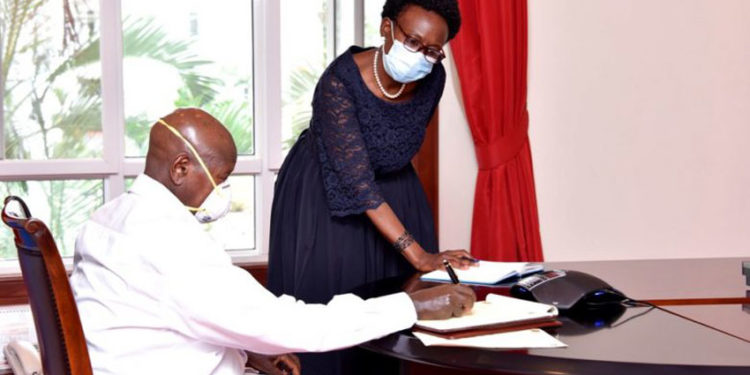 The number of confirmed COVID19 cases hit a worrying record high 203, putting Minister Aceng and government’s progress in the fight against the disease under strict public scrutiny.

“Today Friday 15, 43 people have tested positive for Coronavirus, pushing Uganda’s tally to 203 confirmed cases,” reads the statement that would later become the worst nightmare for the already lockdown strikened Ugandans.

The record high number of confirmed cases to be reported in a single day include 11 Kenyans, 5 Tanzanians, 17 Ugandans, 2 Burundians, and 4 Eritreans who entered Uganda via various border entry points.

The development comes at a time when the various measures adopted by government through the ministry of health are increasing growing unpopular.

Early this week, the Speaker of Parliament Rebecca Kadaga added her voice to those of other Ugandans to express concern over the sky rocketing foreign cases in the country, exposing the lives of others to a high danger of possible infection in-spite of their strict adherence to the rules of the lockdown.

Ugandans have in the most recent days come out to vent their displeasure against Minister Aceng and government for continuously keeping them under lock whereas the obvious culprits – the foreign truck drivers are left to roam freely at the detriment of public safety.

Many have even gone a head to say that the current lockdown is unnecessarily imposed against Ugandans as an excuse for those at the forefront in the fight against the disease to continue profiting from the fatty budgets allocated to their offices.

“In situations where every district receives 160millions to fight a disease they have only heard or read about in the papers and radio stations, besides billions in other donations, then how can you expect the lockdown to be lifted even if Community infections reduced to zero for five consecutive months?” Wrote a one Joseph Kasale on Facebook.

“At the current rate, these people will begin picking malaria patients from hospitals and declare them COVID19 positive so as to continue with their public looting.the country has gone to the dogs bannange.kanve wano,” Lamented a one Allen Nsanga.

With the public anger evidently at it’s boiling point,with many alleging that the failure to control the disease spread from the foreign truck drivers is an intentional move for the officials involved to continue milking the government coffers dry, there should be argent measures to be put in place as a way of restoring public confidence which seems to be at it’s lowest.

The negative effects of the lockdown upon people’s livelihood has also complicated things for Ugandans. A considerably big number of them now feel and sternly argue that they would rather be left to go back to their jobs and die from the disease rather than of starvation.

The fact that the local communities have laboured to observe the stringently harsh presidential directives including staying at home, leaving their jobs, keeping the curfew rules among others as a sacrifice which has resulted in a drastic reduction in the spread of the virus locally, importation of the disease is unfair and points towards government importance and ineffectiveness.

Unless something is immediately done to manage the crisis over importation of the disease by truck drivers, Minister Aceng risks muddying her earlier achievement of successfully curtailing the disease internally as the public would magnify her mega failure to describe her tenure at the ministry of health as one that led to the unnecessarily avoidable loss of lives of many Ugandans.