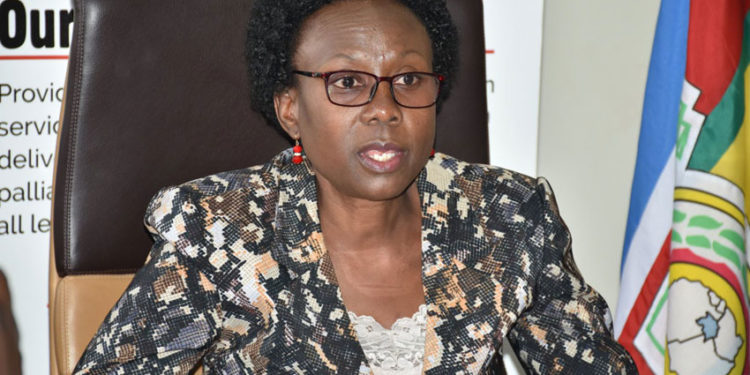 With the country recording her highest number of Coronavirus cases on Friday 15, Ugandans turned their verbal terror towards one person – Dr Ruth Jane Aceng, majorly accusing her of failure to manage the truck drivers while also keeping the innocent citizens under an unnecessary lockdown, urging her to step aside as the situation seems to be going out of hand.

Uganda’s efforts in the fight against the disease hit a snag with the confirmation of 43 new cases, smashing the record set just the day before of 21 cases on Thursday 14, all of them from cross border occurrences.

The selflessly unrelenting sacrifices by Aceng’s healthy Ministry had made her name reserved for praise from the contented Ugandans who seemed to believe she was indeed the woman for the job under the circumstances on the onset of the Coronavirus threat.

Since Uganda confirmed her first Coronavirus case on March 20, the Ministry of Health under the capable leadership of Aceng managed to keep the disease spread under check, with the ban on foreign entries and exits explaining the remarkable milestone.

With 160 out the 203 cases being registered from the commodity trucks moving across borders, one would not fail to laud the efforts of the ministry in that specific regard.

With the continuously unending infections among the truck drivers, the prior too clean image of the super elegant Minister have been thrown in jeopardy. Ugandans have variously castigated the Health Ministry under her stewardship for being too incompetent to handle the situation.

Others have argued that the officials are using the disease as an excuse to continue keeping the public under the lockdown while the Frontline strategists continue getting the big bread in the due course.

Reading through furnace hot comments by Ugandans following the announcement of the new cases on Friday, one would unquestionably establish that the development has taken Aceng’s earlier popularity under siege as Ugandans hurled all-sorts of insults towards her leadership with no reservations with some calling for her resignation.

Below, we bring you some of the many comments on the Ministry of Health’s official Facebook page following the announcement of the new cases which shows that the hey days for Aceng before Ugandans are way behind her.

“Shame on you Aceng. Shame upon your Health Ministry. Shame on your Museveni. You should admit that you have lost the battle and resign or else risk going down as the Minister under whose watch thieves stole from government as they kept Ugandans in home prisons. Resign now.” A one Federico Kizza responded in anger over the announcement.

“Ministry of health stop this foolhardy hoolabaloo.  wamma Ugandans, they have tested an average of 2000 truck drivers on a daily basis for more than three weeks. That brings the total to more than 40000 truck drivers. There’s only about less than 5000 truck drivers that go thru Uganda .. Do you understand what I’m understanding? I think there is what the government is testing and setting politically!Eveything is turning out politically beneficial. We should not worry :men have their bad intentions always but the God who created us will have his good intentions prevail over us. Good job,” was an observation by a one Katuramu Jonathan.

On the same, a one Anna Arimpa Bitariho asks the type of war the country is fighting with numbers increasing each day that passes by.

“I don’t know what we are really fighting,,,, numbers are increasing day and night,,, more records are coming,,,, and remember these truck drivers buy food to Uganda when traveling,,, so my question is, aren’t they getting in contact with these citizens who are selling food,, Ministry of Health- Uganda think of a solution,,, we are really loosing the battle,” She lamented.

“But now to be honest what was the use of these 14days we are in for the lock down coz u guys said that with in this time u were going to do something with the truck drivers but instead things are becoming worse. Haven’t you stolen enough money?” Asked Kalemba Joseph.

“It’s clear that some people are benefiting in this period by getting huge sums of money as allowance and so on. Why should ugandans suffer at home with no cases and you leave truck drivers so as the number can keep on increasing. You are targeting mzee to extend lockdown but your evil plans won’t work. I liked your way of doing things at the start but now you have outlived your usefulness,” Tukamushaba Stuart comment on Facebook.

Eventhough Minister Aceng and government have untiringly worked towards fighting COVID19, the remarkable surge in virus infections risks undoing all their earlier achievements. All that needs to be done is to find a lasting feasible solution in handling the issue of imported cases while at the same time managing Community infections without necessarily keeping the population under home confinement. If this is done, it would ease public anger and gain the much required public involvement in the efforts needed by government to effectively kick the disease out of the country.

Is Minister Aceng, Museveni losing the coronavirus war as Uganda's cases jump to 203?