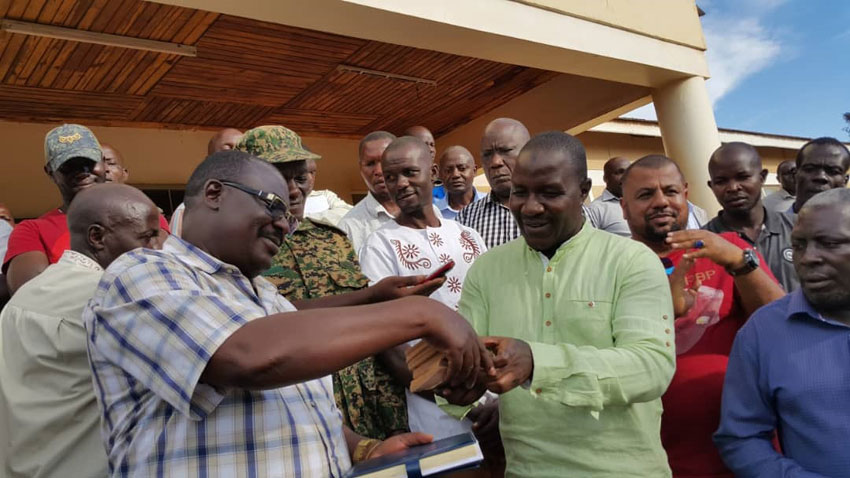 Bugiri Municipality MP Alhaji Asuman Basalirwa has positively responded to President Museveni’s call for MPs to hand over the 20million shillings that was given to them to boost the fight against Coronavirus to District COVID19 task forces.

While handing over the money in cash to Bugiri District COVID19 task force on Monday 4, the opposition chief said that he saw no point in returning the money to the bank of Uganda account that was provided by Parliament for the Speaker of Parliament had made it clear that it would still be sent to the district task forces for the same purpose.

“I have decided not to return this money to Parliament but rather to bring it here so that it can help our people since sending it back wouldn’t help after all, Speaker Kadaga has made it clear that it would be sent to the district either way,” Asuman, who was flanked by scores of his supporters explained amid cheers.

He enumerated how he wished the money to be spent by appealing to the task force headed by Godfrey Nyakahuma, to use the funds to procure food items for the hungry residents of Bugiri Municipality in particular which he represents in Parliament.

” I suggest that this money be used to buy food for the starving population of Bugiri and as a member of Parliament for Bugiri Municipality, I prefer that the money specifically goes to feed the people of the Municipality, ” he ordered.

On why he had chosen to return the money to the district, unlike his Kyadondo East counterpart who rejected the cash outrightly, Asuman explained that he had done this in respect for a court order that had mandated members to deposit the funds with their respective districts.

“As a professional Lawyer, I have chosen to return the money following a court order in respect of the same. I returned it in cash because court asked us to return cash and not expend the money, ” he noted further.

He was issued a receipt by the RDC as proof that the funds had been received, which he said was going to present to the office of the Clerk of Parliament for matters of accountability and also vowed to follow up on the expenditure of the money.

Government will have to borrow USD 1billion to revamp the economy, says Minister Kasaija

Police in Rubanda District is investigating circumstances under which a man slapped his son, leading to death. The deceased has...

Are Ugandans entrepreneurs or just hustlers?