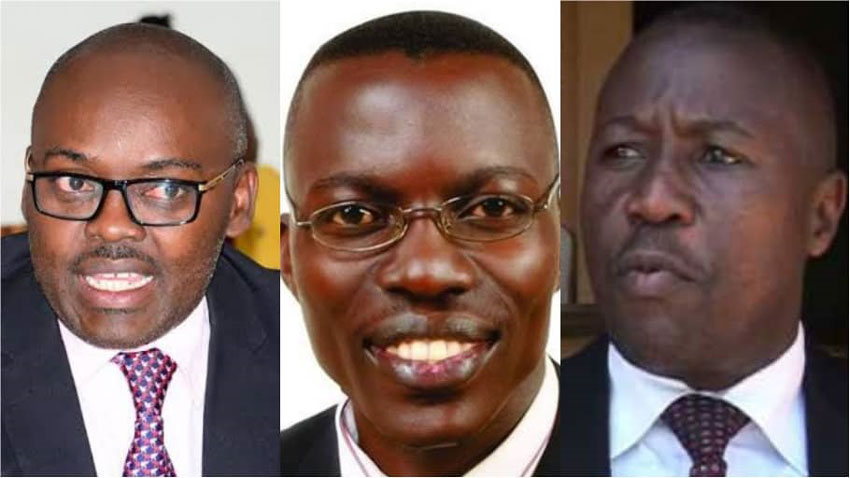 In a public notice, Siranda said Bwanika and Sseggona were masquerading as DP national chairman and Secretary General respectively.

“This is to inform and warn the general public , stakeholders and our esteemed members and supporters that the two persons whose pictures appear above and who are masquerading as National chairman and secretary general of the Democratic Party respectively have never been elected to those positions. They are not even members of the National Executive Committee (NEC) of the party,” said Siranda.

“They are therefore not authorized to transact any business in the name of or on behalf of Democratic Party in those capacities. The Democratic Party disowns and will not take responsibility for any transactions made by them.”

In March this year, the opposition party’s National Council filled the vacant positions on the party’s NEC that saw Bwanika elected National Chairperson and Sseggona as Secretary General.

Others elected included Babirye Mary Kabanda who was made National Treasurer, Patrick Katuramu as the new Deputy Treasurer, Racheal Kagoya as the Deputy Women leader and Alex Kiwanuka as the representative of Busoga Region.

DP has been embroiled in turmoil in recent months as the party gears up for internal elections in preparation for the national elections slated for next year.

Norbert Mao, who has led the party for the past 10 years, has declared intention to retain his seat, while a number of party members want to unseat him.

Among those who want Mr Mao’s seat is Ms Brenda Nabukenya, a former woman MP for Luweero District, Butambala County MP Muwanga Kivumbi, and Mr Lubega Mukaaku, who in 2016 competed for the national presidency as an independent.

DP is currently split right at the centre by a fight between party members who are allied to People Power, a pressure group led by Kyadondo East MP Robert Kyagulanyi, aka Bobi Wine, and those allied to Mao.

There are also other groups, which are largely silent in the ongoing fight, especially those allied to Kampala Lord Mayor Erias Lukwago and Mukono Municipality MP Betty Nambooze.

Prophet Mbonye: I had a physical fight with satan, I left him nursing wounds

Prophet Mbonye: I had a physical fight with satan, I left him nursing wounds