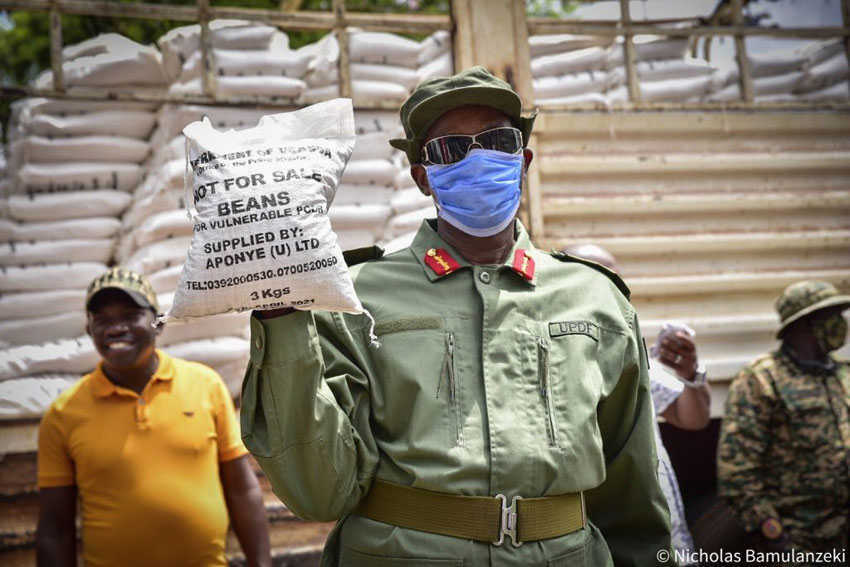 KAMPALA, UGANDA:  Four senior officials of the office of the Prime Minister (OPM) have today been arrested and handed over to the criminal investigations department by the Anti Corruption Unit of State House over inflating COVID19 relief food prices.

The Permanent Secretary Ms. Christine Guwatudde Kintu, the accounting officer Joel Wanjala; the Assistant Commissioner Procurement Fred Lutimba and the Commissioner Disaster Management and Head COVID19 Relief Management Martin Owor were arrested following reports that they rejected prequalified suppliers who were offering lower prices for maize and beans and instead awarded contracts to companies that accepted the inflated figures.

According to the Head of the ACU Lt.Col. Edith Nakalema, she received a directive from President Yoweri Museveni on Wednesday April 8, to investigate the on-going COVID19 related food procurement exercise.

This followed President Museveni’s concerns that the prices quoted for the food supplies where much higher than what the majority of suppliers he talked to had indicated. According to available information, President Museveni was informed that normal food prices range between Shs 2500 – 3000 for a kilo of maize while beans cost between Shs 3000- 4000, which information he shared with the Prime Minister.

The President was shocked to learn that accounting officers instead awarded supply letters indicating Shs 3900 per kg for maize flour and Shs 4500 kg for beans, making a difference of Shs 500 per kilo. OPM ordered for 9,030,000million kg of maize and 635,000kgs of beans. The inflated figure caused government a loss in excess of Shs 2bn in the first phase alone representing 5% of the total procurement.

“Following a directive by H.E the President, we carried out a special investigation on the ongoing COVID19 related food procurement exercise. Preliminary findings have established that the accounting officers in the office of the Prime Minister were inflating prices and rejecting lower price offers from various suppliers of maize flour and beans. They have been arrested to help with the on-going investigations,” Nakalema said.

The four officials were handed over to AIP Bernard Ochaya and SP Tweheyo Jackson of the CID at Parliament Buildings. If found guilty, the officials will be charged with abuse of office through an arbitrary act prejudice to the interest of their employer, causing financial loss and facilitating fraudulent accounting and conspiring to commit fraud.

President Yoweri Museveni announced relief food for the most vulnerable Ugandans who were affected by the two-week government closedown due to the COVID19 spread fear.