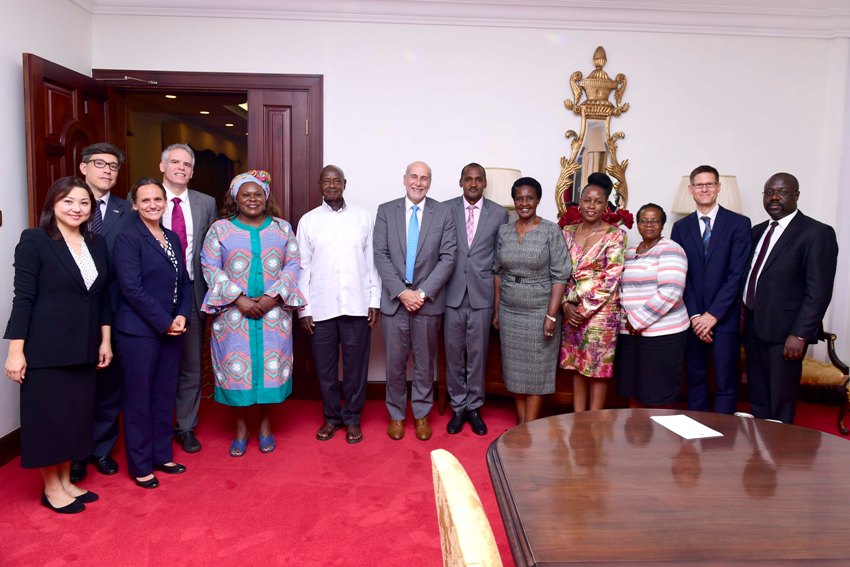 The President Yoweri Kaguta Museveni in a group photograph with the UN and EU delegations plus some of the government officials shortly after their meeting at State House in Entebbe on 4th March 2020.

“I totally support the initiative because gender violence is traditional. In the past women were discriminated against particularly at the time of inheritance. We used to have endemic conflicts among clans. But the basis of mistreating women is being tackled. Government has put in place the necessary legal framework and remedies to gender-based violence including ensuring women empowerment,” he said.

The President said by introducing universal education and women empowerment programmes, women are able to make their own independent decisions.

The President was yesterday speaking during a meeting he held with a delegation of Envoys of the United Nations (UN) and European Union (EU) at State House, Entebbe.

The UN Resident Coordinator Rosa Malango led the delegation that included the EU Ambassador to Uganda H.E. Attilio Pacifici. Their mission was to brief him about the Spotlight Initiative.

The EU and the UN have embarked on a new global, multi-year, multi- partner initiative focused on eliminating all forms of violence against women and girls – the Spotlight Initiative.

In Uganda, 56 percent of women and girls between the ages of 15-49 experience spousal violence while 22% are subjected to sexual violence, according to the Uganda Demographic Household Survey 2016. While the existence of gender-based violence violates the human rights of women and children and slows down progress in achieving sustainable inclusive human development, it has persisted in Uganda due to social beliefs, perceptions and attitudes about societal roles of women and men, boys and girls.

To reverse this trend, the United Nations system in Uganda, with funding from the European Union (EU), is supporting the Government of Uganda to implement the four-year $42.4 million Spotlight Initiative aimed at eliminating violence against women and girls by 2030.

Uganda is among the 8 African countries to benefit from this initiative. The Initiative comes with the highest level of commitment globally and will be governed by the UN Deputy Secretary General and the Vice President of the EU Commission.

The initiative will be launched during the International Women’s day celebrations on the 8th March 2020 in Mbale, Eastern Uganda.

The Minister of Gender, Labour and Social Development Hon. Frank Tumwebaze and that of Trade, Industry and Cooperatives, Amelia Kyambade attended the meeting among others.

The UN Resident Coordinator to Uganda Rosa Malango said that the world salutes President Museveni for being a champion against gender violence.

The European Union Ambassador to Uganda H.E. Attilio Pacifici informed the President of preparations of a business forum and exhibition that is slated to run from the 9th to 10 March 2020 in Kampala. Uganda will be represented by 350 enterprises while the EU will have 150. They discussed modalities of ensuring the success of the forum in view of the global outbreak of the Corona virus.

He also briefed President Museveni on road construction projects that include the Ntinda- Kyanja road junction on the Kampala-northern by pass, the Atiak –Larobi road and the construction of the Tororo – Gulu railway line.