by watchdog
in National, News
9 1 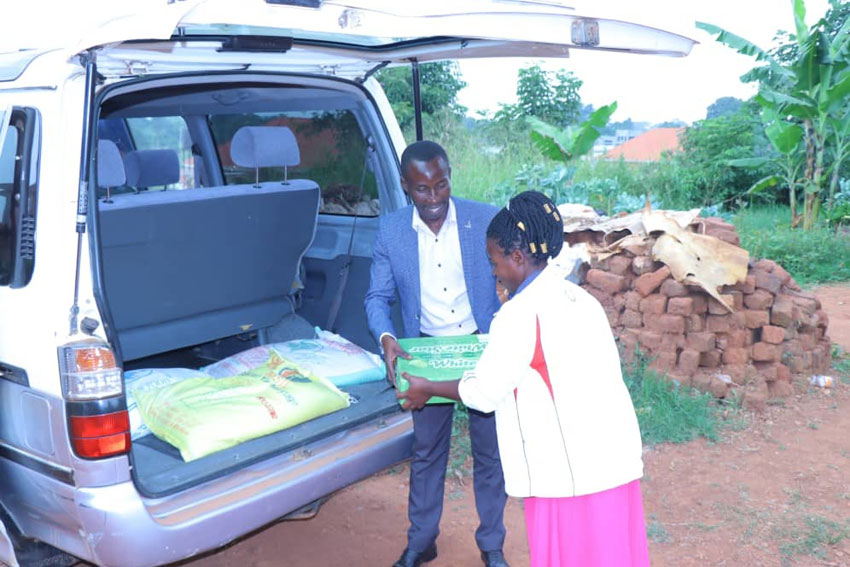 Kabenge donating a house necessities to the family of Ssebadduka

Renowned Kampala Pastor Gideon Kabenge has committed himself to help the needy children in Wakiso District.

Kabenge also the founder of Ararat Children Junior School said he has lived up to see people starving in the deep villages of Wakiso District which prompted him to take care of Grace Ssebaduka and his daughter Peace Nakiraga.

Ssebadduka, 30 who could hardly stand up by the time Kabenge visited him last Wednesday at his home in Nsasa village, is lame with a swelling stomach.

“I believe I have some starting resources to help this man (Ssebadduka) who cannot get himself money after spending almost five years down in this wheel chair,” said Kabenge before handing over scholastic materials and other house necessities such as a bed sheet and a blanket to the needy Ssebadduka.

Ssebadduka’s life has not been rosy ever since he was attacked by a stroke five years ago when he was still staying with his grandfather John Munanuuka.

He has been under intensive care since at his sister Dorothy Nakiryowa’s dilapidated house located in Nsasa village, Wakiso District.

By the time Kabenge reached out to him, Ssebadduka’s life had become agonizing according to Nakiryowa who takes care of him.

“We’ve been starving with limited resources and it is very hard to be with him because every day he needs to eat healthy,” Nakiryowa revealed to Watchdog.

Kabenge also a father of two children is confident that he will take care of Ssebadduka and his daughter Nakiraga.

“The daughter (Nakiraga) will be admitted at my school and I have to make sure that she finishes the University,” Kabenge remarked.