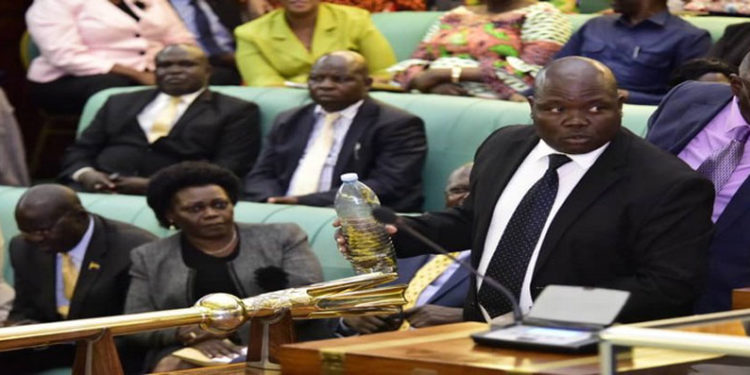 MP Abala holding a bottle containing locusts while in the House

Ngora County MP David Abala has appealed for intervention in combating the invasion of locusts in Teso and other parts of Northern Uganda.

Swarms of locusts entered Uganda in Amudat district from Kenya in early February and spread to the rest of the districts in Karamoja.

The insects have since crossed to Otuke district in Northern Uganda and parts of Teso.

As part of the interventions in combating the locusts, shs15 billion was allocated to buy pesticides and acquire aircrafts for aerial spraying.

Abala who was raising a matter of national importance during plenary on 18 February 2020 said that despite the release of the funds, no intervention has been made in Teso.

“As we talk, from Saturday when my district was invaded by locusts, no intervention has taken place and yet every day, the locusts are laying eggs and as we know, each one of them lay 300 eggs at once,” he said.

Abala warned that if the eggs hatch in the next few days, the locusts will spread to the whole of Teso Region.

Abala who laid on table a bottle with locusts said that, ’ I also want to appeal to government to sensitize the local community and build their capacity to fight the locusts’.

The Government Chief Whip, Ruth Nankabirwa said that the biggest chunk of the shs15 billion budget was used to pay arrears to the desert locust body.

“We had to pay shs11 billion because we could not receive the support we wanted since we were in arrears. We regret that, we were supposed to pay every year. But as we speak now, there is a team on the ground,” she said.

The Minister of State for Animal Industry, Hon Bright Rwamirama said government has trained the local community and the Uganda People’s Defense Forces (UPDF) on how to deal with the locusts when their eggs hatch.

“The chemical for aerial spray was not there but we have procured it. We have also secured two aircrafts; one will be based in Moroto and the other in Soroti. The issue that we are not doing anything is not true,” he said.

He added that the army has provided a helicopter to survey and map out areas which are locust prone.

Rwamirama added that the biggest threat of the locusts is in Somali and Oman. “The good news is that the wind is changing direction and next month may be they will be blown out of Uganda,” he said.

The Minister also warned the local communities in the affected areas and the general public against consuming the locusts saying that they are harmful.

“We are spraying and at the same time, some people are catching locusts. It is not wise to eat locusts because we are spraying. Sprayed locusts have chemicals.” he said.

Speaker of Parliament, Rebecca Kadaga asked the minister to present a weekly update on the fight against locusts.

Speaker Among attacks cabinet ministers for being too lazy