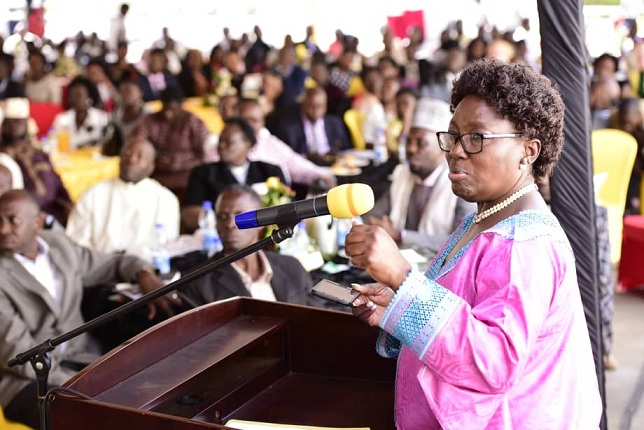 Speaker Rebecca Kadaga has expressed anger against government for refusing to give Parliament Radio a frequency to enable the public to listen in on live proceedings.

Kadaga who was addressing guests at the Inter-Faith Prayer Breakfast organised by Parliament on Tuesday, said that there are a lot of redundant frequencies around the city but the government has deliberately refused to offer one to the Parliament.

As a way of informing the public about what is happening in the House, Kadaga launched ‘Bungeni’ a mobile app that will enable the Members of Parliament and Public to track the progress of bills and also make comments on them before they are passed into law.

“Today, we have launched an APP where the public will have a contribution to the law-making process. We have a radio station here but the government has refused to give us a frequency. We have frequencies in this city which are not being used but we cant get it. So, let us launch this APP which will enable us to reach far to our voters,” she said.

Kadaga urged the public to continue embracing the Parliamentary Week since it’s the time when local people interact with their leaders while at Parliament.

Meanwhile, Joseph Serwadda who was among the speakers called on Parliament to speed up the scrutiny and passing into law the Marriage Bill.

Serwadda, the Presiding Apostle, Born Again Church in Uganda, said if the Bill is passed quickly it will save many Ugandans who have been misled by ignorant preachers.

“Madam Speaker this bill will help us to silence people seeking to destabilize the marriage institution in the country. We see the Parliament as the only solution that causes order in this matter. We need legal stance that will silence him and many others for now and in the future, if you Parliament quickly pass the Marriage Bill into an act you would have silenced the naysayers about marriage and serious relationships,” said Serwadda.

His statements were directed at the current preachings of the Pastor Aloysius Bugingo of House of Prayer Ministries International who recently said marriage vows of ’till death do us part’ are not biblical and is the cause of murders between couples.

“I have read the Bible countless times but I have never come across any verse that tells marrieds that it will be death to do them apart. Those vows made by Anglicans, Catholics and Born-again, are satanic, that is why when couples find that they are no longer compatible, they find ways taking away each other’s lives because the vows involve death,” Bugingo said in one of his preachings and even on his radio Salt FM.

I Want To Build My Own Legacy At KCCA FC, says striker Patrick Kaddu